Professor André Brown, Vice-President of Xi’an Jiaotong-Liverpool University (XJTLU) recently delivered a speech at the TEDxSuzhou 2015 Annual Conference titled Predicting the Future and held at the Suzhou Culture and Art Center. The audience of about 500 was treated to 12 different talks delivered by keynote speakers from important worldwide organisations. 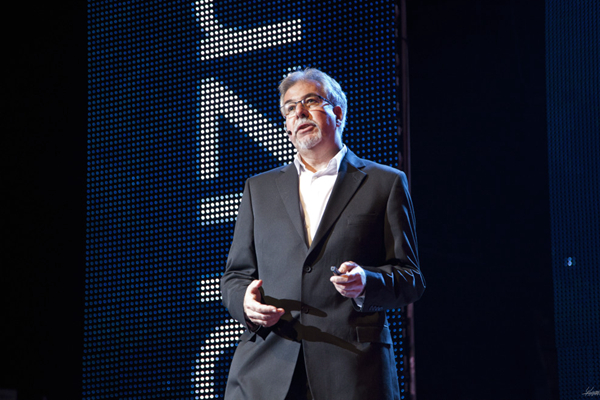 Speaking on the Future of Architecture, Professor Brown began by sharing his thoughts on the TEDx event as a concept and noted that in terms of the future of education, this event and the TEDx organizing team represent a direction people should enthusiastically embrace in the future. ”Seeing young people and recent graduates attending and getting involved in such an important worldwide event that brings together education, enlightenment and a vehicle to expand knowledge is indeed very pleasing” he noted about the TEDx event in his opening remarks. 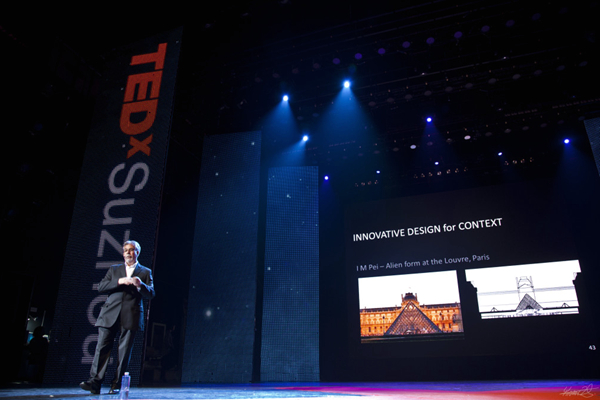 Product Manager for Bing, Mr. Rani Qumsiyeh kicked off the event by sharing how contemporary digital technology can be used when working on predictive analysis to model data and project outcomes. BBKing, Chief Director of the electronic sports program, StarsWars provided insight into the development of contemporary computer-based games based in his key role directing the development of products such as The Game of Life.

The importance and significance of traditional skills in today’s world however was not overlooked. The future for local art was presented by Mr. Peigen Xu, an Arts and Crafts Master of Suzhou, with particular expertise in carving that captures both inheritance and innovation.

Other talks included Mr. Jason Inch, looking at which countries have taken the lead in directing global development over the decades and Mr. Ken Ross looking at the nature of the Future University.

The main talks were concluded with a presentation by Mr. Matt Wang, Vice President of IBM China Development Labs. One of his key conclusions was just how powerful the human brain is, and when compared to the best of our modern computers, how little energy it uses to process similar amounts of information.

Professor André Brown has been closely engaged with China since 2009. At the Shanghai Expo in 2010, where he coordinated the Urban Design Futures Week at the Liverpool Pavilion, he promoted XJTLU activities and encouraged support for its aim. Professor Brown’s research and teaching has focused on Innovative Technologies in Architecture and related fields.

XJTLU was proud to be a sponsor of this event and the University continues to support and value TEDx activities. “It was great to see students from XJTLU along with academic and administrative staff all benefiting from the inspirational and exciting environment created by this Predicting the Future event,” said Professor Brown.

TEDxSuzhou is a local, independent and nonprofit organisation under the license of TED since 7 October 2011. TED stands for "Technology, Education, Design" and its mission is to build an innovative community by integrating online and at TED and TEDx events around the world all year long.