XJTLU in the Media in July

Homepage>News>XJTLU in the Media in July


XJTLU representatives were included in stories or sought for comment in English-language media outlets including Global Times, The Star, CGTN, Yahoo, the New York Times, The Guardian and Daily News.

XJTLU in the Chinese national media 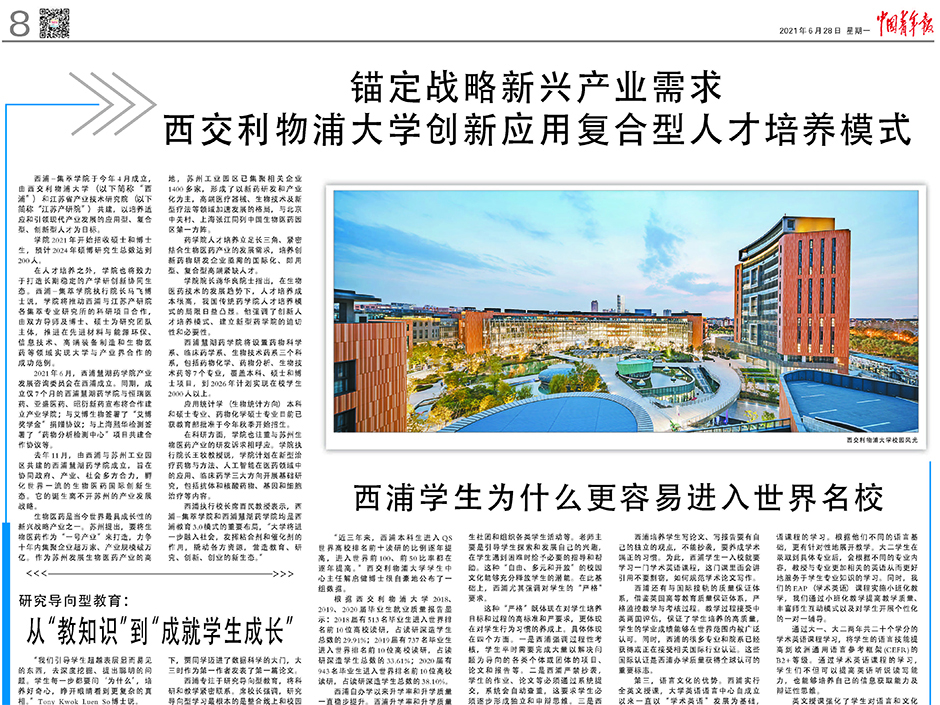 Headline: Why students from XJTLU are more easily admitted to world-famous colleges and universities 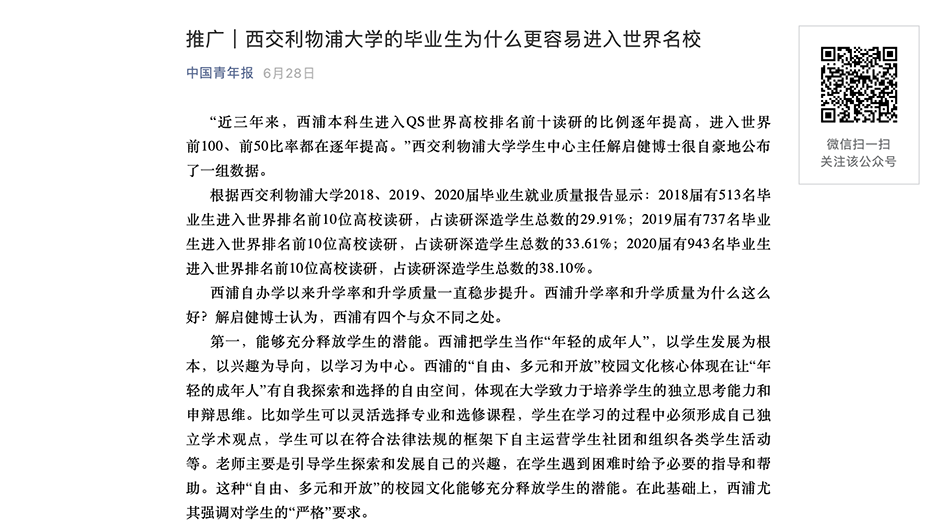 Summary: Why is it easier for XJTLU students to get admitted to world-famous colleges and universities? XJTLU’s enrolment rate and student quality have risen steadily since the University’s establishment. In the article published on 29 June, Dr Qijian Xie, Director of XJTLU’s Centre for Student Affairs, discussed XJTLU’s unique abilities to help students meet their full potential and the advantages of its education model.

The news is also reported by China Youth Daily – Qingtuanzi. 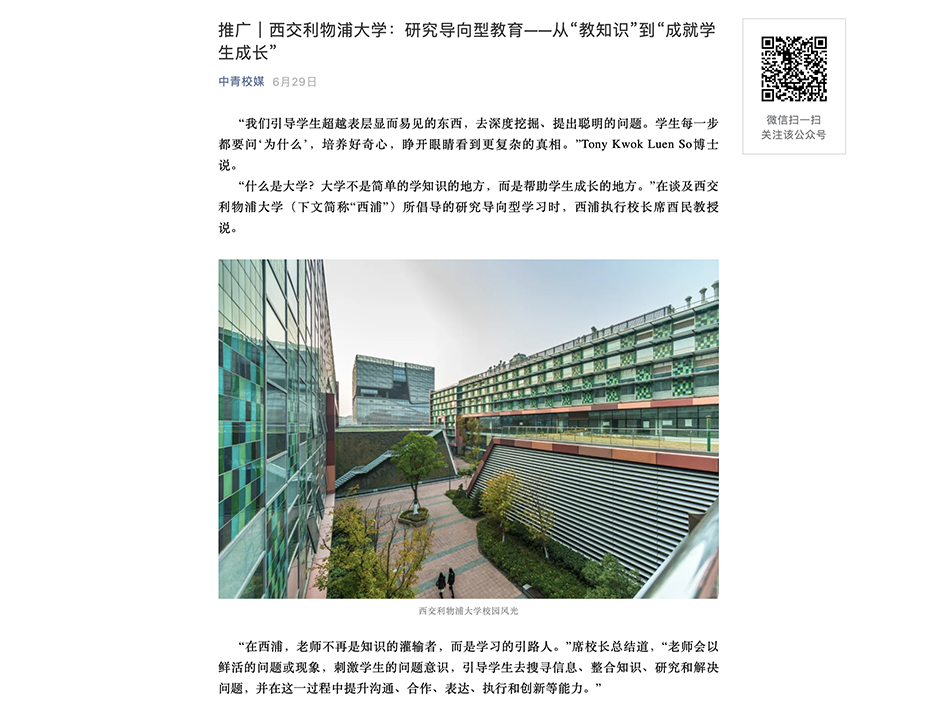 “At XJTLU, teachers lead students on the journey of learning rather than just imparting knowledge,” President Xi said. “Teachers stimulate students’ awareness with vivid examples, and guide students to collect information, integrate what they have learned, and solve problems. In this process, instructors help students improve their skills in communication, collaboration, expression, execution and innovation.”

Headline: Exploring the future of education 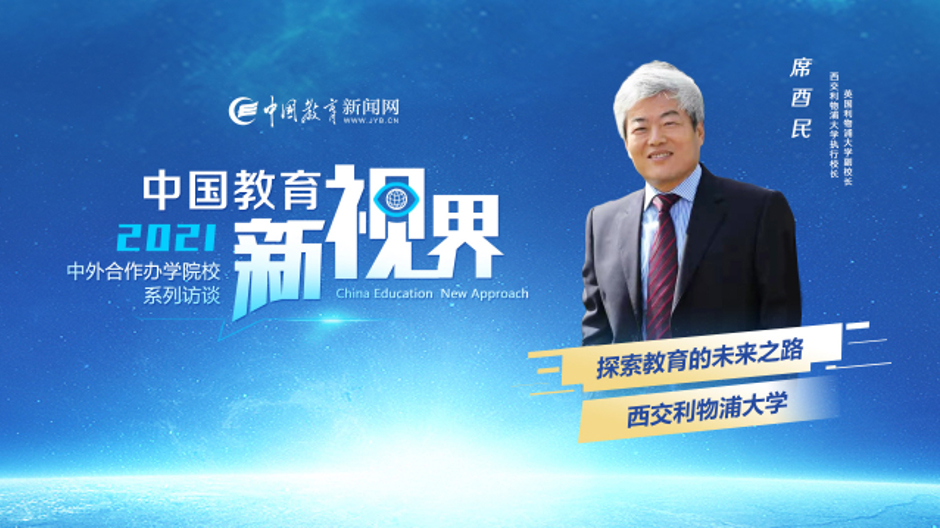 Summary: On 25 June, The Paper reported that XJTLU’s 3.0 model will officially start during XJTLU’s 15th anniversary celebration, furthering the University’s exploration of integrating with society and leveraging resources to create new type of education ecosystem.

Professor Youmin Xi, XJTLU’s Executive President, said: “XJTLU 3.0 was inspired by the establishment of the XIPU New Era Development Research Institute in May 2018. It aims to create an international education and innovation ecosystem that cover different geographic areas. It will draw on XJTLU’s expertise in coordination; working with government; forming international industry and financial alliances; and leveraging various social resources.”

Media in Sichuan
XJTLU was mentioned on several media platforms in Sichuan, including the mobile APP and official WeChat account of The Cover, the portal website Sichuan News Net and the online forum Mala.cn. Three articles about XJTLU published on the mobile client side of The Cover received nearly 600,000 views.

Headline: How does XJTLU strengthen students’ competitiveness through international education 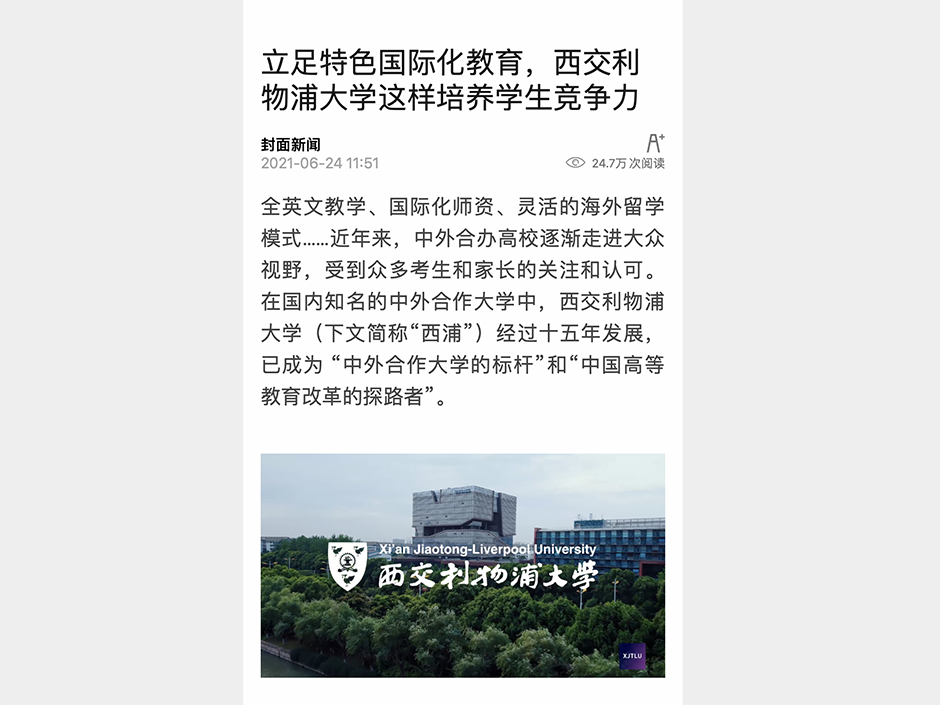 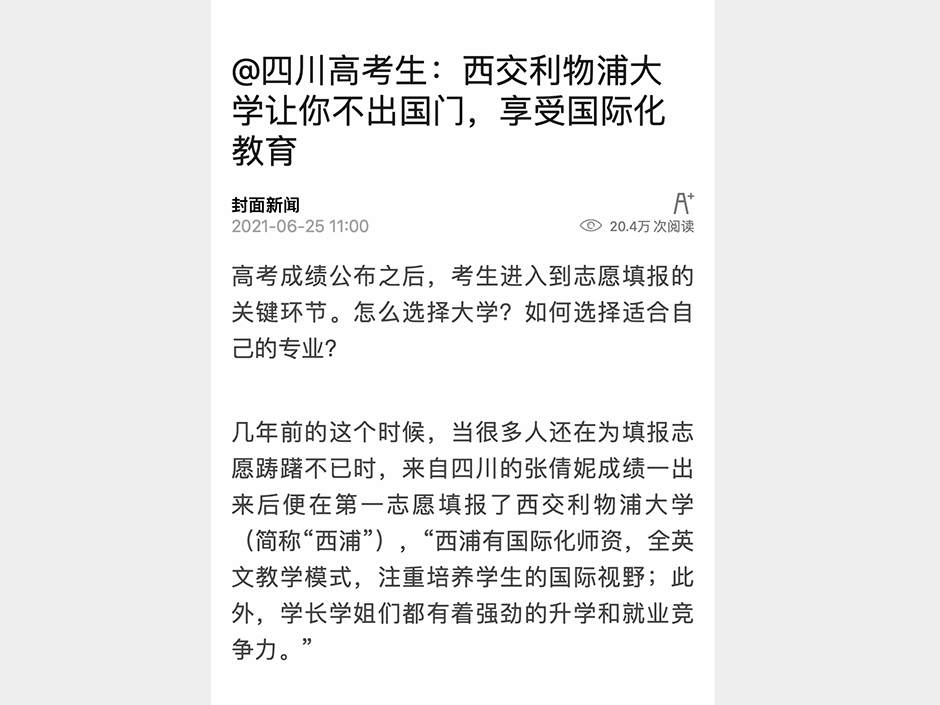 Summary: Immediately after students learn their Gaokao scores, the next step is applying to colleges. But how should students choose a university? How should they choose a suitable major? On 25 June, The Cover illustrated XJTLU’s education model and philosophy through the story of Qianni Zhang, a student from XJTLU.

The news is also reported by The Cover WeChat. 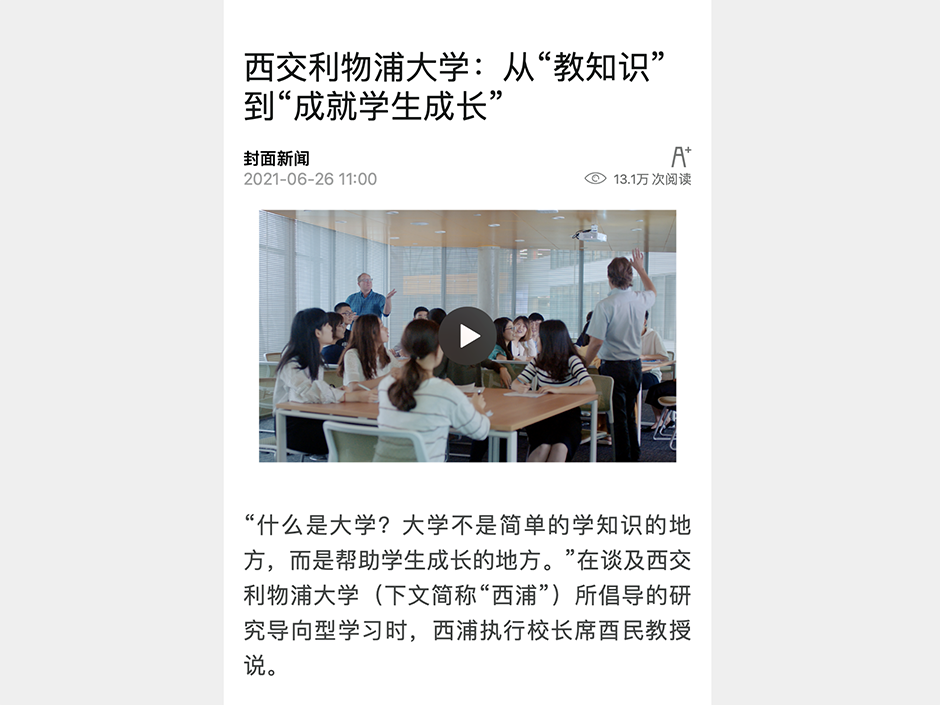 Summary: On 26 June, The Cover reported on XJTLU’s educational philosophy, focusing on interest-driven learning and individual development. Professor Youmin Xi, XJTLU’s Executive President, said: “Education is not simply a diploma. Education focuses on students’ learning, growth and personal qualities. It changes one’s goals, vision and mission in life and prepares one to enter society and take control of one’s own life.”

Headline: How to meet with success in XJTLU 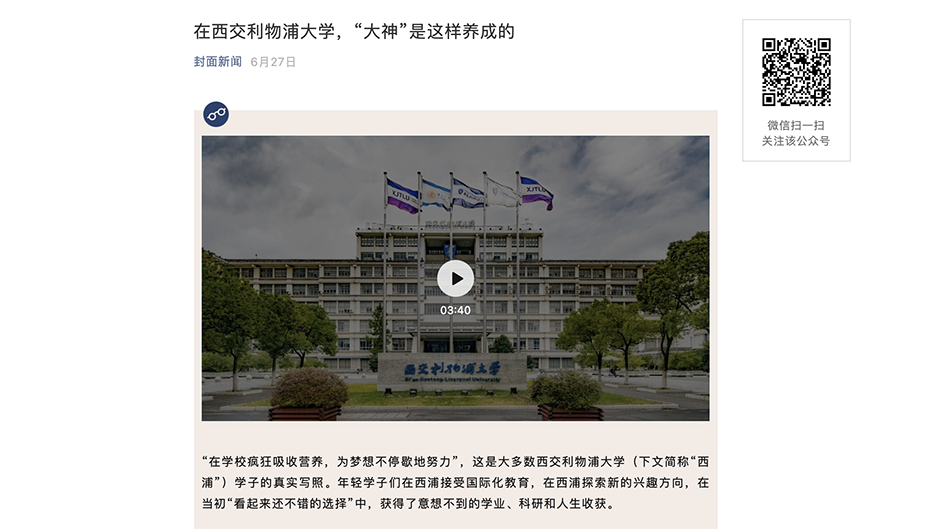 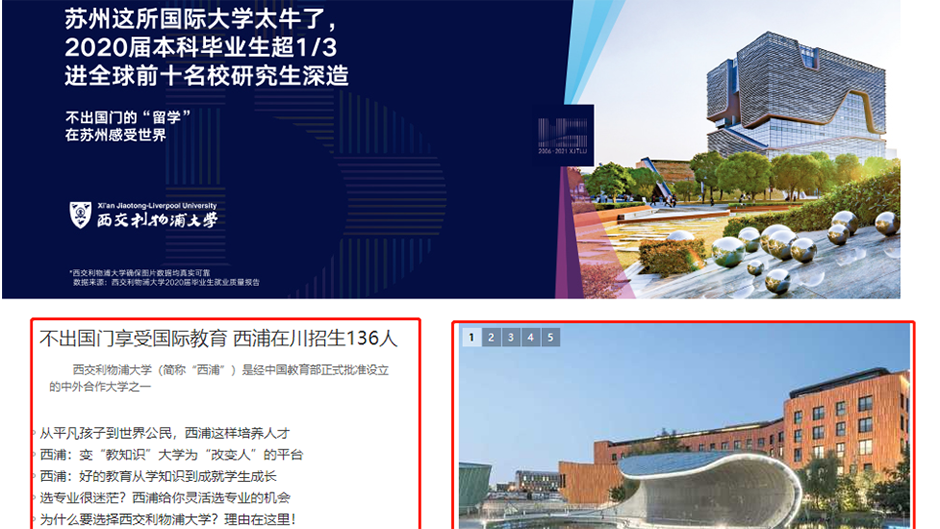 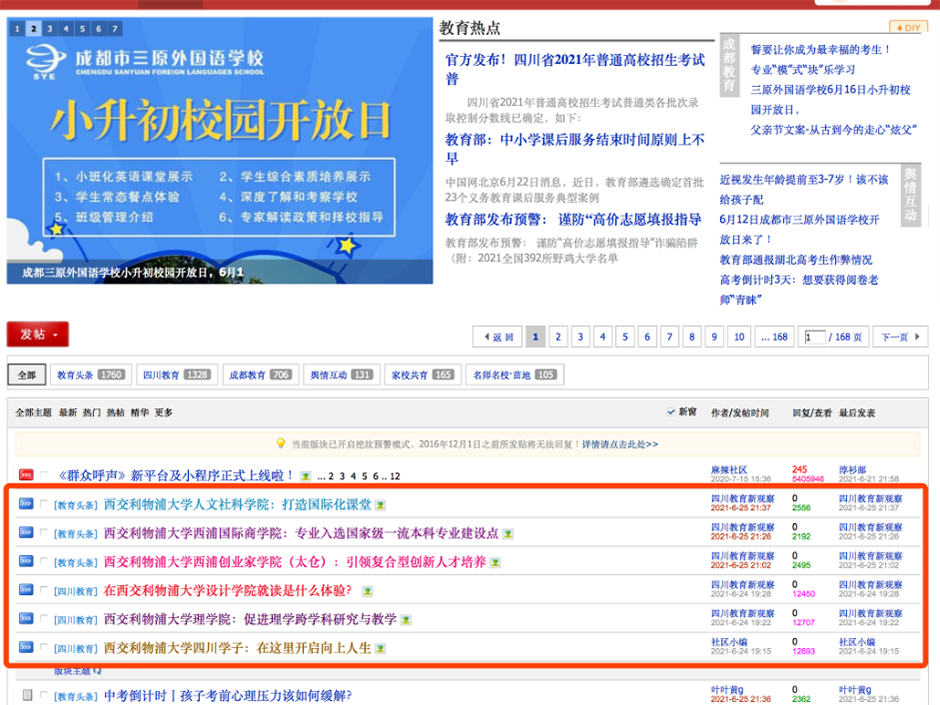 Headline: This University offers all-English courses! Are you worried your inadequate English skills will prevent you from keeping up with classes? This university can help you out

Summary: On 26 June, Guizhou Daily reported on the XJTLU English Language Centre’s academic English courses offered to all the University’s students. One of the largest language centres in Asia, it employs nearly 200 English teachers who have served at top universities in China and have extensive experience in the field.

Ling Xia, Director of the English Language Centre at XJTLU’s School of Languages, said academic English and other tutoring courses fully prepare students to use English in class, in internships, during off-campus activities, for enrolment exams and in their future employment.

Headline: You are extremely lucky if you are enrolled by this University - over 80% of its graduates are admitted by prestigious overseas universities! Listen to what senior schoolmates say

Headline: College application is ongoing! These internationally-accredited majors are available in domestic universities 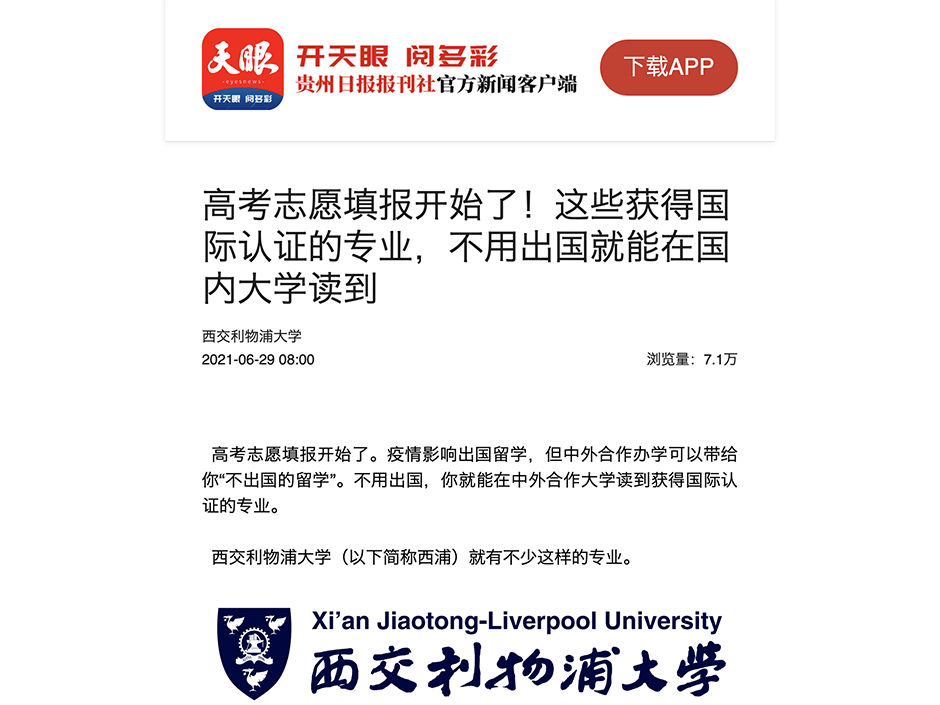 Summary: On 29 June, Guizhou Daily reported on Times Higher Education’s ranking of XJTLU’s subjects and accredited majors. XJTLU appeared for the first time in Times Higher Education’s ranking of universities in emerging economies released on 9 March; XJTLU ranked 112th. In the QS World University Rankings 2022 released in June, XJTLU ranked between 801th and 1000th in the world, and ranked 46th among 58 universities in the Chinese mainland included in the rankings.

Headline: What do you learn in artificial intelligence-related majors? Which students are suitable for these majors? Educators from this University will tell you 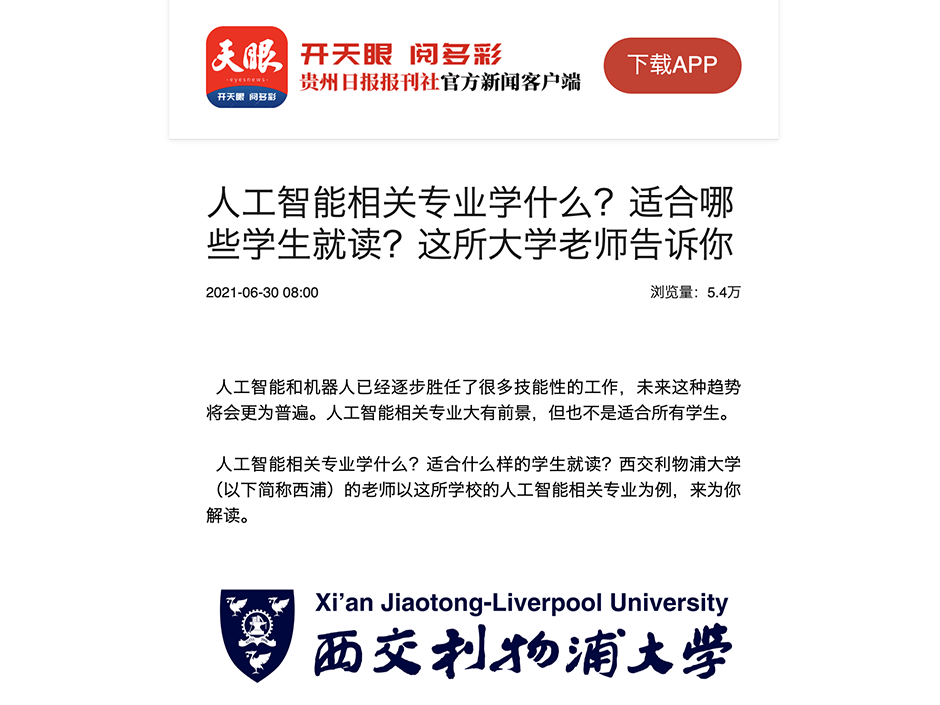 Summary: On 30 June 30, Guizhou Daily reported that artificial intelligence and robots are replacing many skilled jobs and that this trend will become more common in the future. What do students learn in programmes related to the study of AI? What are the characteristics of students best suited for these programmes? In the report, XJTLU academics answer these questions. 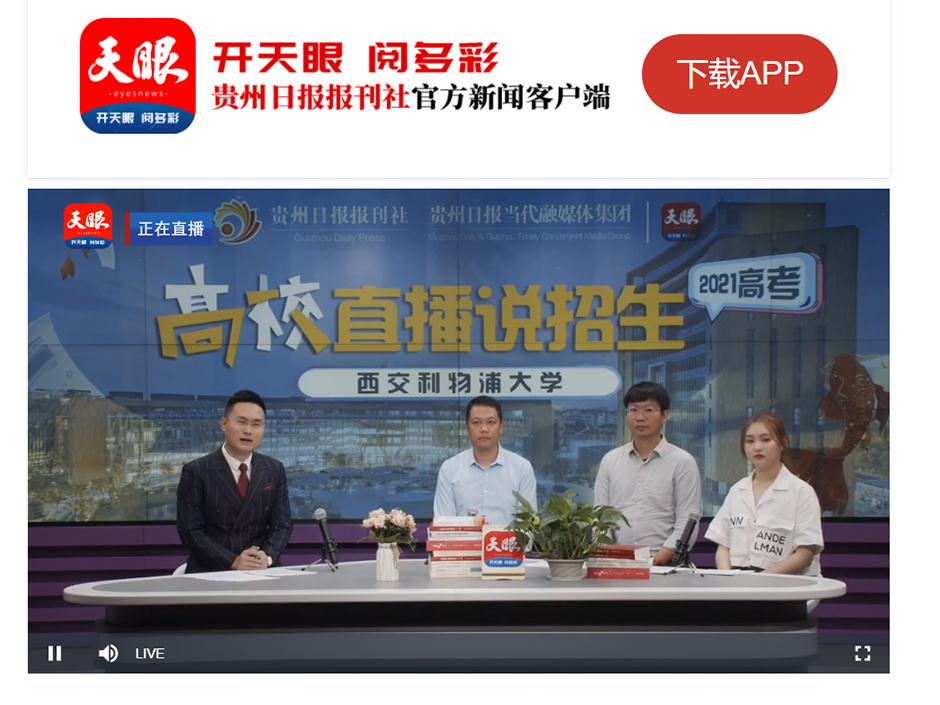 Summary: On 27 June, Xinhua Daily reported that the XJTLU Wisdom Lake Academy of Pharmacy was jointly established by XJTLU and Suzhou Industrial Park and aims to collaborate with government, industry and society to build a world-class international biopharmaceutical innovation ecosystem in Suzhou.

According to the report, the Academy aims to enrol 80-100 undergraduates and about 50 masters and doctoral students in its first-time admission, and plans to increase the number of enrolled students each year to reach more than 2,000 enrolled students by 2026.

Headline: XJTLU: Empower students to chase their dreams and light up hope for students 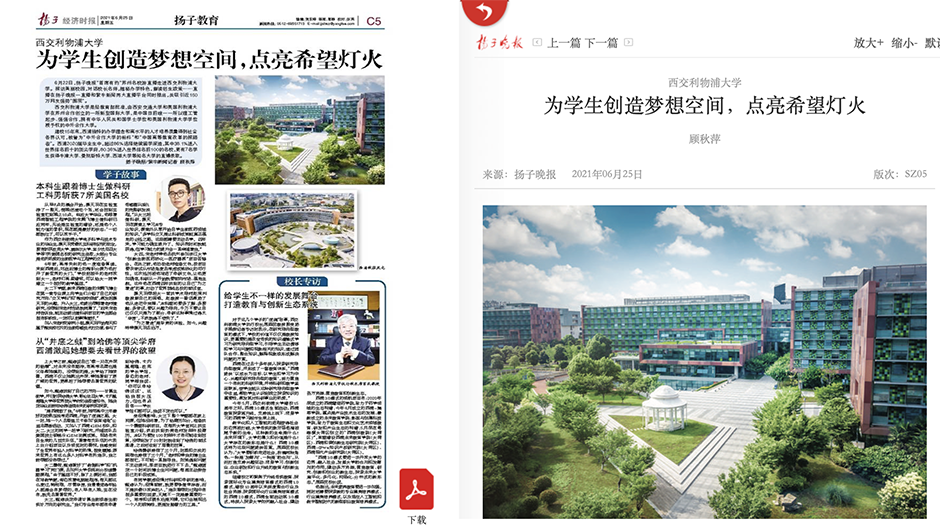 Summary: On 25 June, Yangtze Evening Post featured XJTLU’s educational exploration and development achievements over the 15 years since its establishment, along with its future plans. XJTLU has been widely recognised for its unique philosophy and talent cultivation, honoured as “a role model of Sino-foreign joint venture universities” and “a pathfinder for higher education in China”.

Professor Youmin Xi, XJTLU’s Executive President, said that under the research-oriented education model, a school does not merely impart knowledge, but serves to transform the education to research-oriented learning, guiding students to proactively seek knowledge to solve problems through teamwork and knowledge integration. 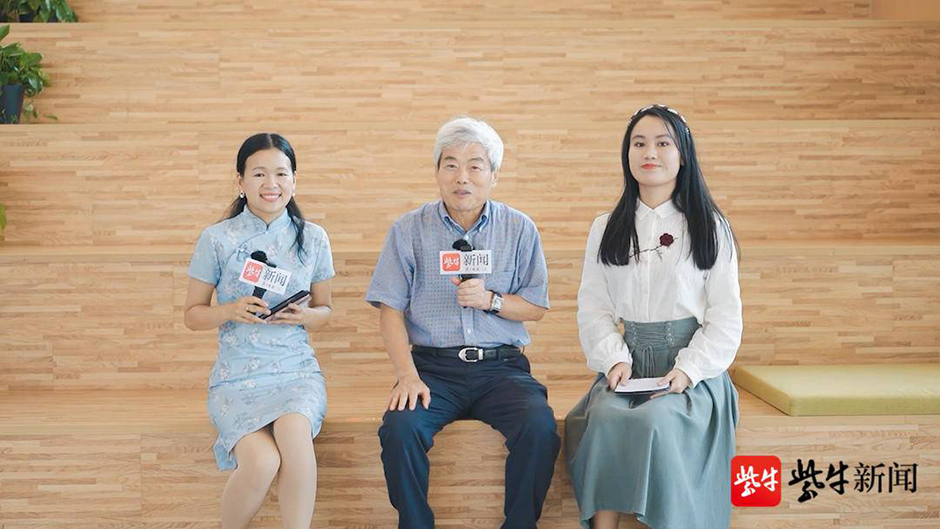 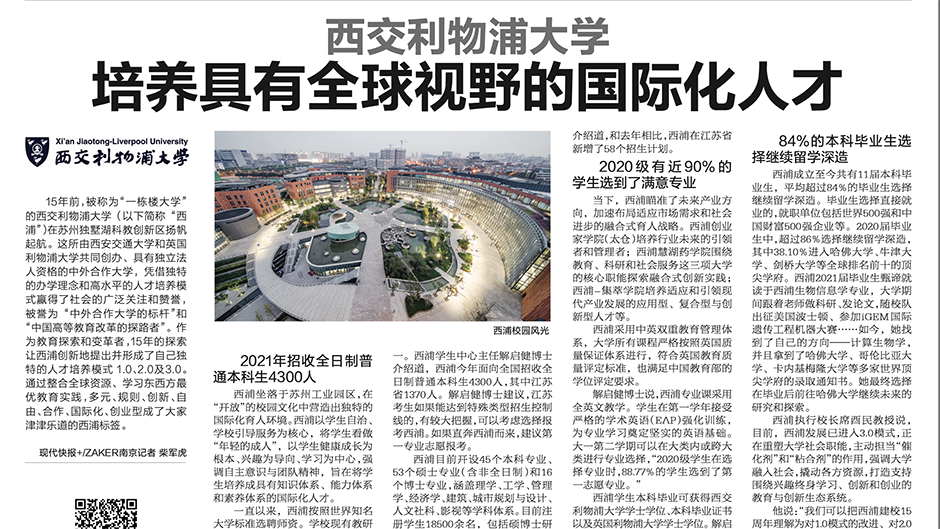 Summary: On 26 June, Modern Express interviewed Dr Qijian Xie, Director of XJTLU’s Centre for Student Affairs. Dr Xie said XJTLU will enrol 4,300 full-time undergraduate students in 2021 and noted that nearly 90% of students enrolled in 2020 are satisfied with their degree programmes. 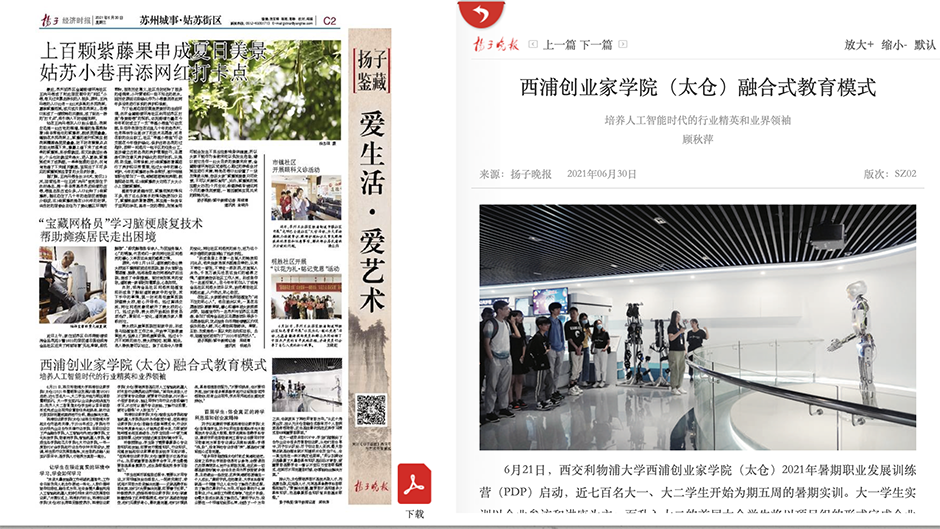 Summary: On 30 June, Yangtze Evening Post reported on the 2021 Summer Professional Development Program (PDP) of XJTLU Entrepreneur College (Taicang), noting that nearly 700 Year 1 and Year 2 students recently began their five-week summer training. During the training, Year 1 students will visit enterprises and attend lectures, and Year 2 students, the first student cohort, will work in project teams to complete tasks and challenges assigned by corporate mentors. In addition, they will analyse and create solutions for actual industry cases.

Headline: Study internationally from China; 117 students from Yunnan enrolled at XJTLU this year 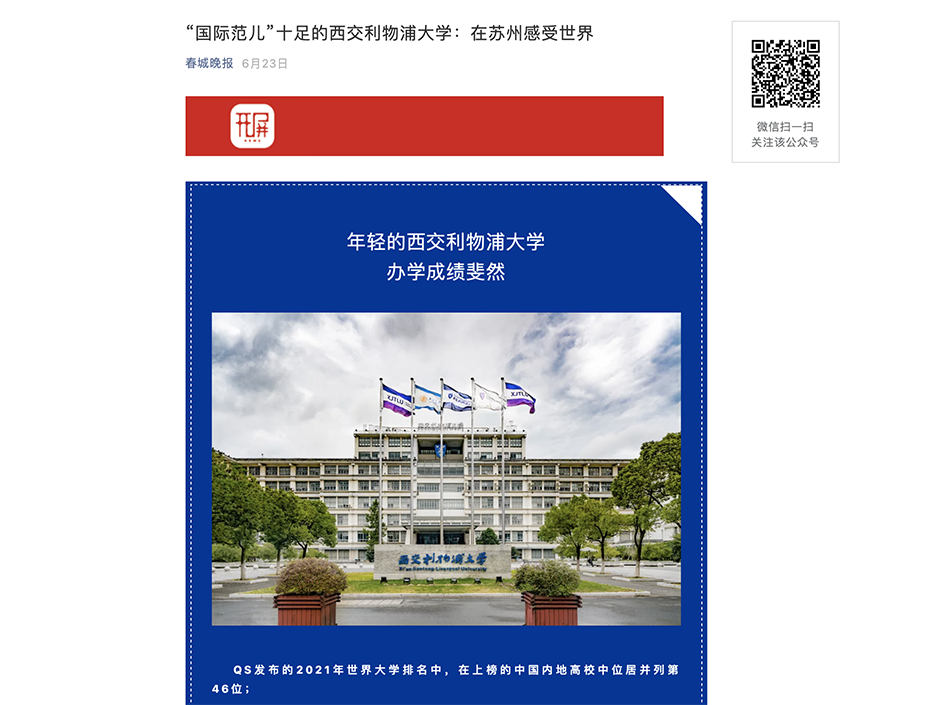 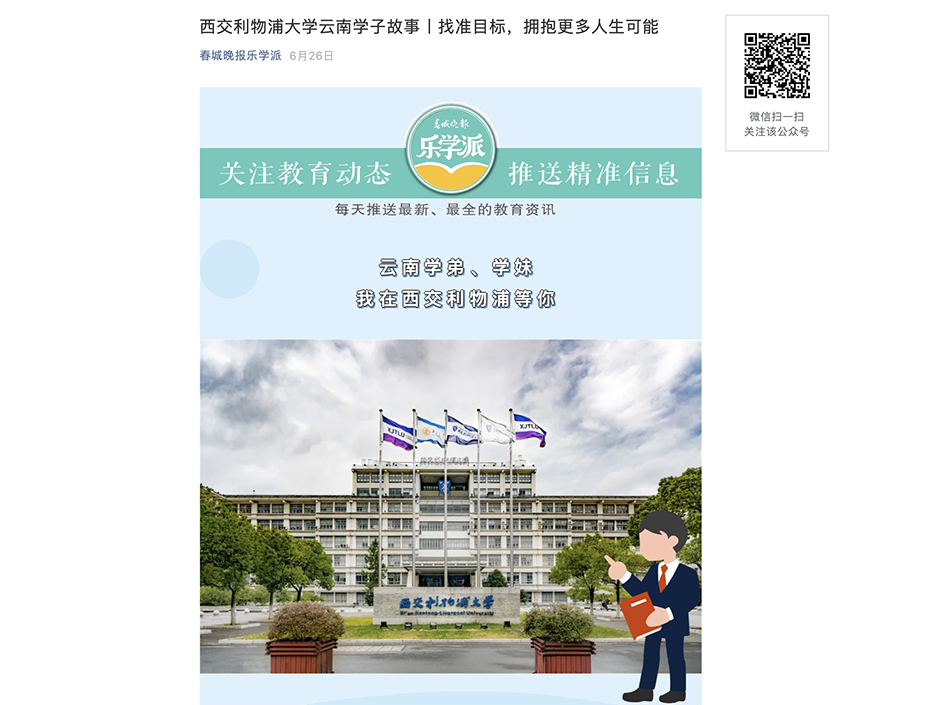 “At XJTLU, teachers lead students on the journey of learning rather than just imparting knowledge,” President Xi said. “Teachers stimulate students’ awareness of problems with vivid examples, and guide students to collect information, integrate what they have learned, and solve problems. In this process, instructors help students improve their skills in communication, collaboration, expression, execution and innovation.” 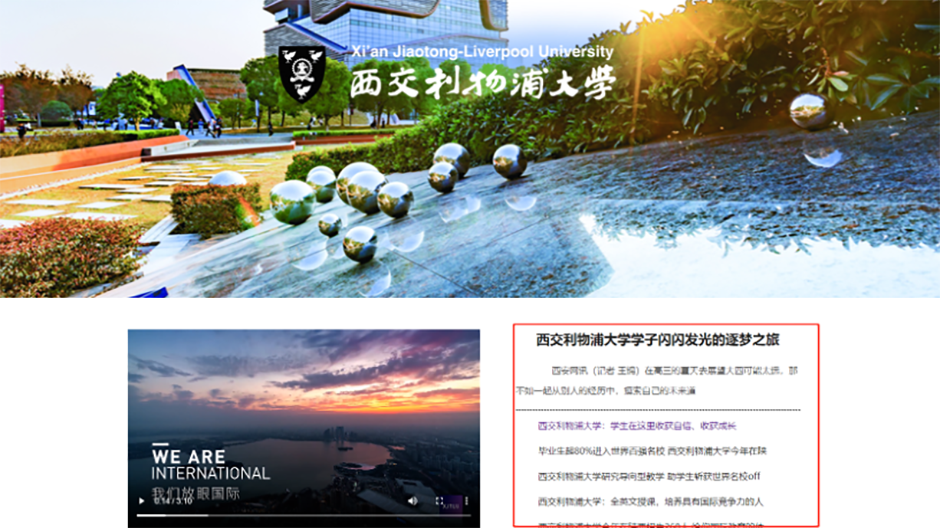 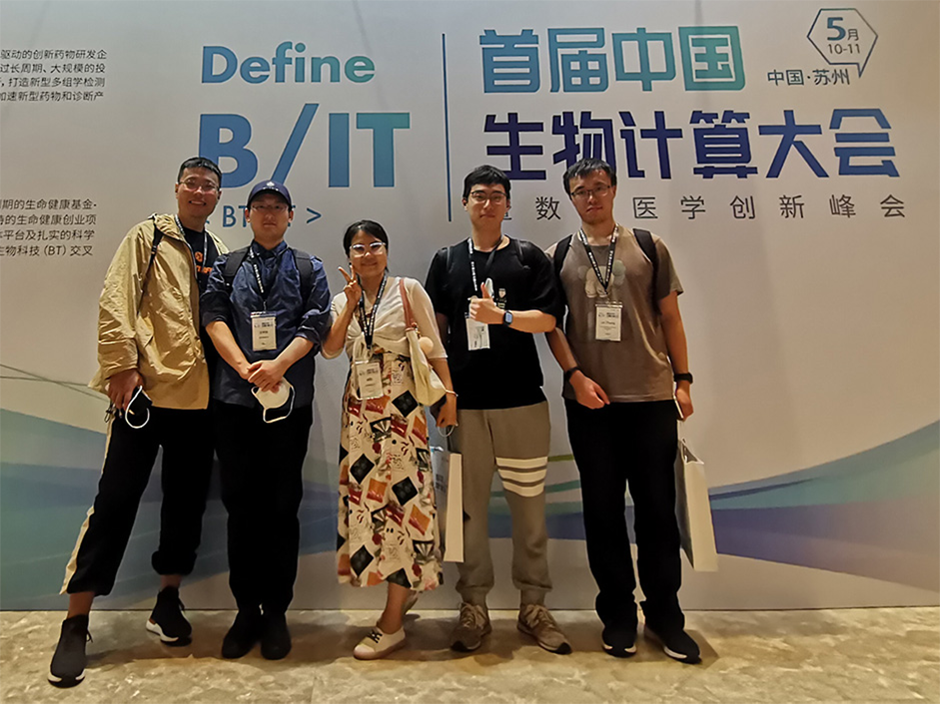 Summary: On 30 June, China Youth Daily reported that a neural network model that can simultaneously predict 12 RNA (ribonucleic acid) modifications was developed by an XJTLU research team. The achievement was published in Nature Communications on 29 June. Zitao Song, a Year Four student from XJTLU’s School of Applied Mathematics, conducted mathematical modelling and deep learning for this project under the guidance of Dr Jia Meng and was the first author of the paper.

The news was also reported by Jiangsu TV and Yangtze Evening Post. 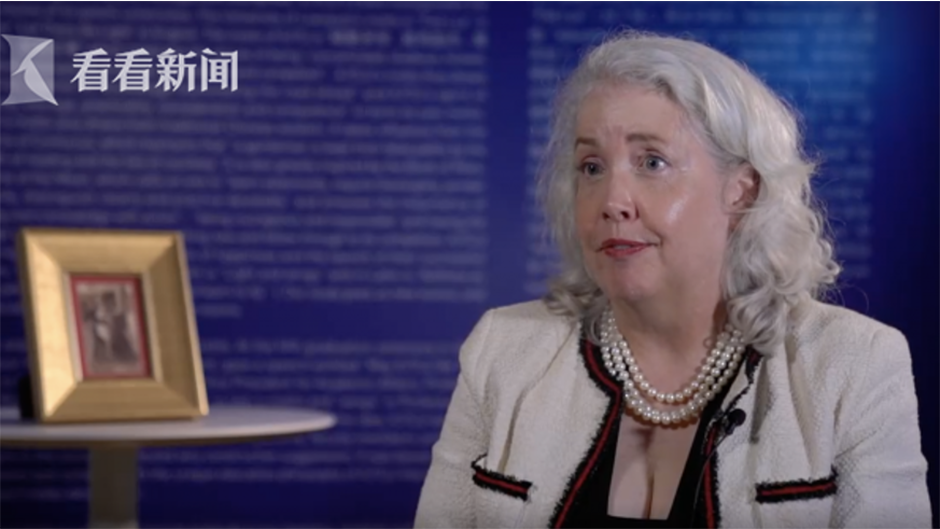 Summary: What is it like to travel across the ocean to the land where your ancestors lived and worked, pursuing your own career there? On 12 July, Kankannews reported that Dr Ellen Touchstone of XJTLU’s International Business School Suzhou followed the footsteps of her grandparents to China, becoming an educator at XJTLU.

Summary: On 6 July, Global Times reported that EU leaders and businesses are calling for strengthened relations with China.

Dr Dragan Pavlicevic, associate professor at Xi'an Jiaotong-Liverpool University, commented that the Comprehensive Agreement on Investment (CAI) would result in support for the broad European economy, but that issues over sanctions would likely need to be resolved before CAI ratification would be considered.

The news was also reported by The Star. 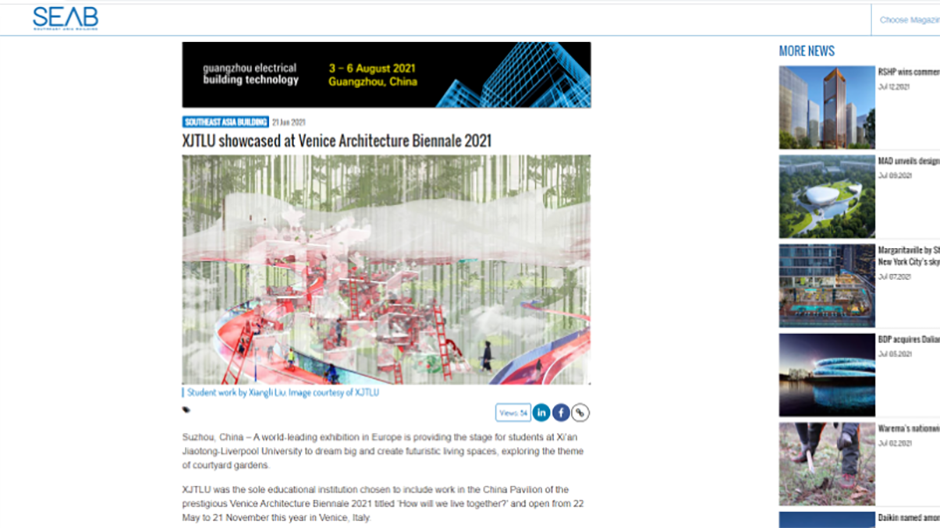 Summary: On 21 June, Southeast Asia Architecture Magazine reported that Xi 'an Jiaotong-Liverpool University was the only educational institution selected for the Chinese Pavilion at the 2021 Venice Architecture Biennale. The exhibition, "How Will We Live Together”, began 22 May and runs until 21 November in Venice, Italy.

Richard Hay, Associate Professor of Architecture at XJTLU Design School, was quoted, saying: "Given that our international University’s home city of Suzhou, China, has an unparalleled collection of historic ‘Yuan’er’ courtyard gardens, it is fitting that our students have been invited to share futuristic work drawing on their concept.” 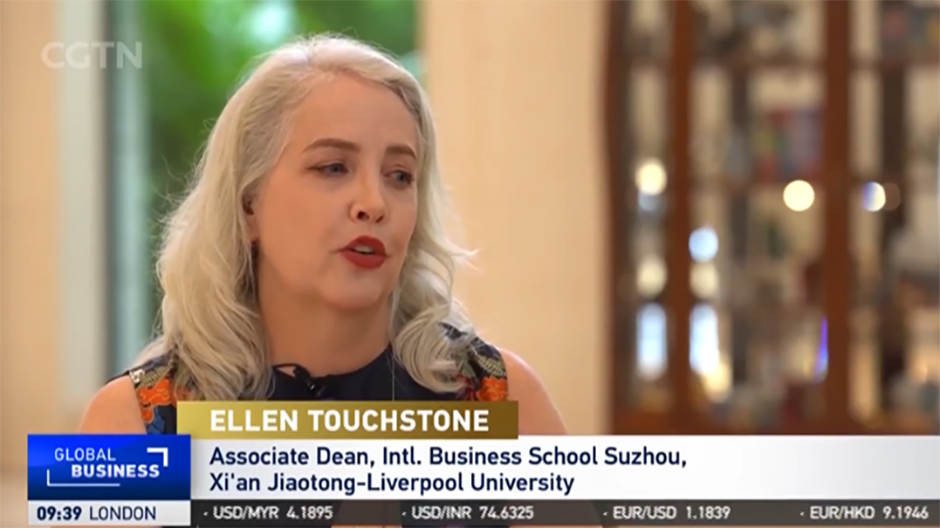 Summary: On 10 July, CGTN reported that Chinese telecom giant Huawei announced it would invest $150 million in the next half decade in skilled digital workers “to find innovative solutions to create a ‘ more eco-friendlier and more inclusive world’.”

CGTN’s report included comments from Dr Ellen Touchstone, Associate Dean at XJTLU’s International Business School Suzhou. She said when schools closed during the pandemic, digital technology allowed students to keep learning. However, she said there are "glaring inequalities" among school districts in the U.S because of problems with internet connectivity and policy uncertainties.

Summary: On 24 June, Xiaowei Li and Lulu Wang published an article on Times Higher Education – Campus, regarding advice on how a university library can provide information literacy skills to distance students through online means. 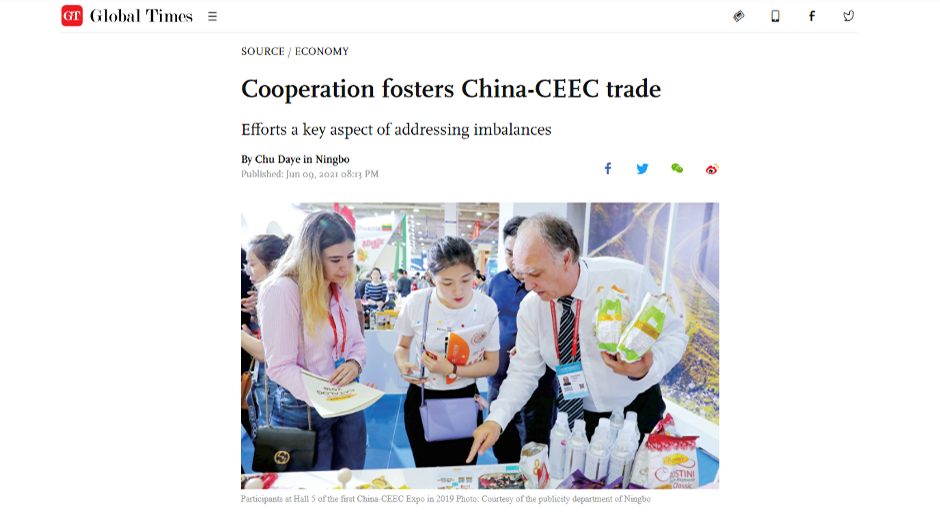 Summary: On 6 June, an article in Global Times included comments from Dr Dragan Pavlicevic, associate professor at XJTLU, who said Central and Eastern European Countries (CEECs) and China could foster more financial help like loans for companies who want to do business in China.

The news is also reported by People’s Daily. 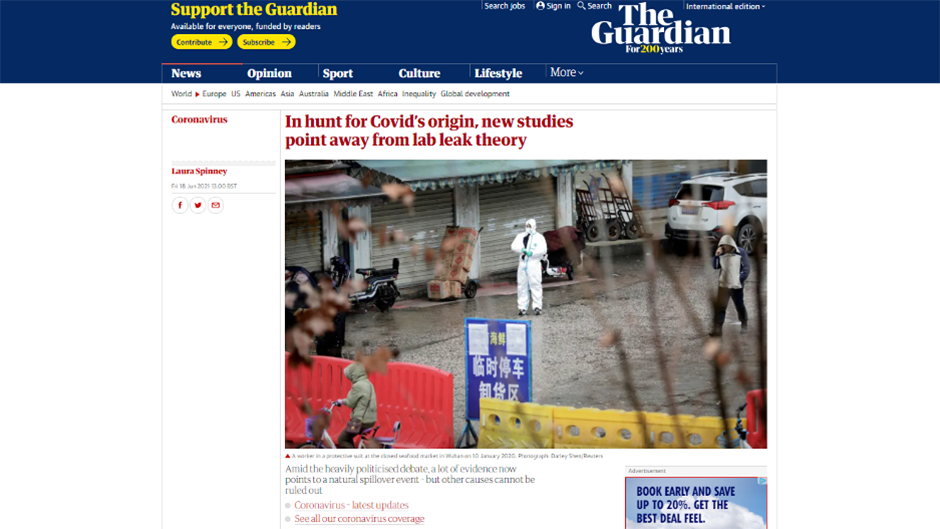 Summary: On 18 June, The Guardian highlighted views from experts about the origins of the Covid-19. Dr Xiaowei Jiang, a viral evolutionary biologist at XJTLU commented on the circumstances that may have led to the emergence of the virus that causes Covid-19.

The news was also reported by Daily News. 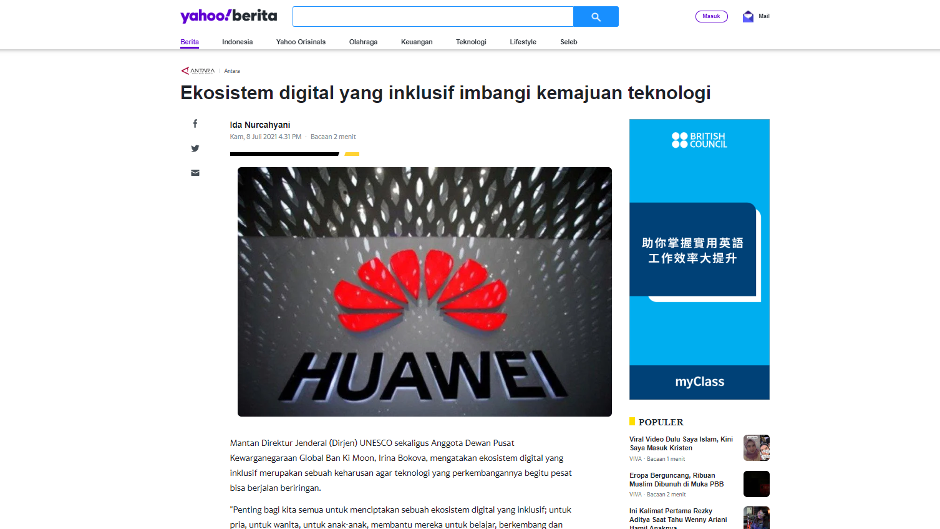 Summary: On 8 July, Yahoo! Indonesia News reported experts’ views about the need for inclusivity in technology. The story included comments by Dr Ellen Touchstone, Associate Dean for Responsible and Sustainable Business Education at XJTLU’s International Business School (IBSS). She said that creativity and empathy are needed to create an inclusive and sustainable digital ecosystem. 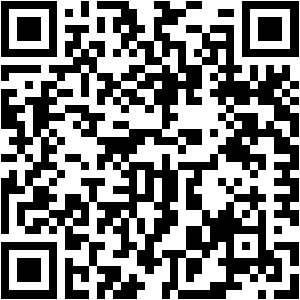