XJTLU in the Media in April

Homepage>News>XJTLU in the Media in April

Researchers from XJTLU have also been included in stories and sought for comment in multi-language media outlets including Times Higher Education, EurekAlert!, Xinhua News Agency, ArchiExpo, FT Adviser, and KOMPAS. 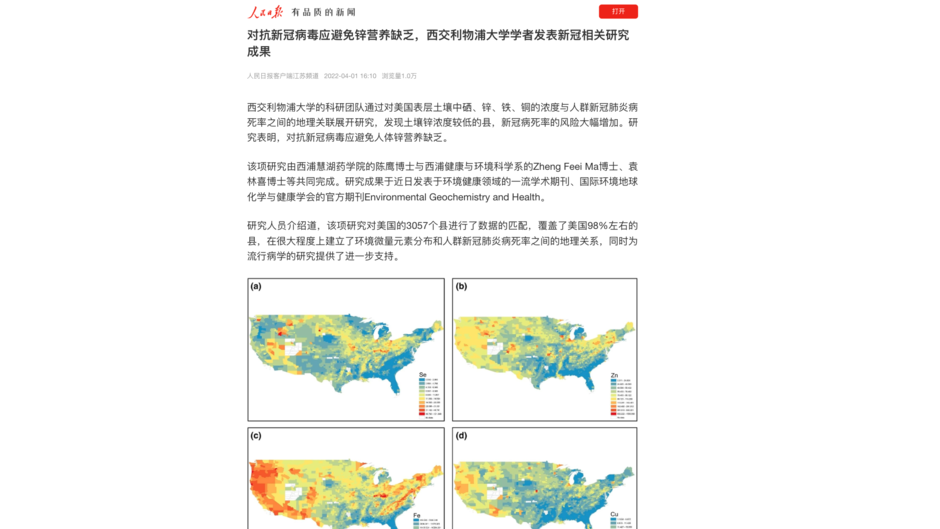 Summary: A research team from Xi’an Jiaotong-Liverpool University recently investigated the association between concentrations of zinc, selenium, iron and copper in surface soils and the case fatality rate of Covid-19 in the USA. Their finding suggests that zinc deficiency may affect the severity of Covid-19. 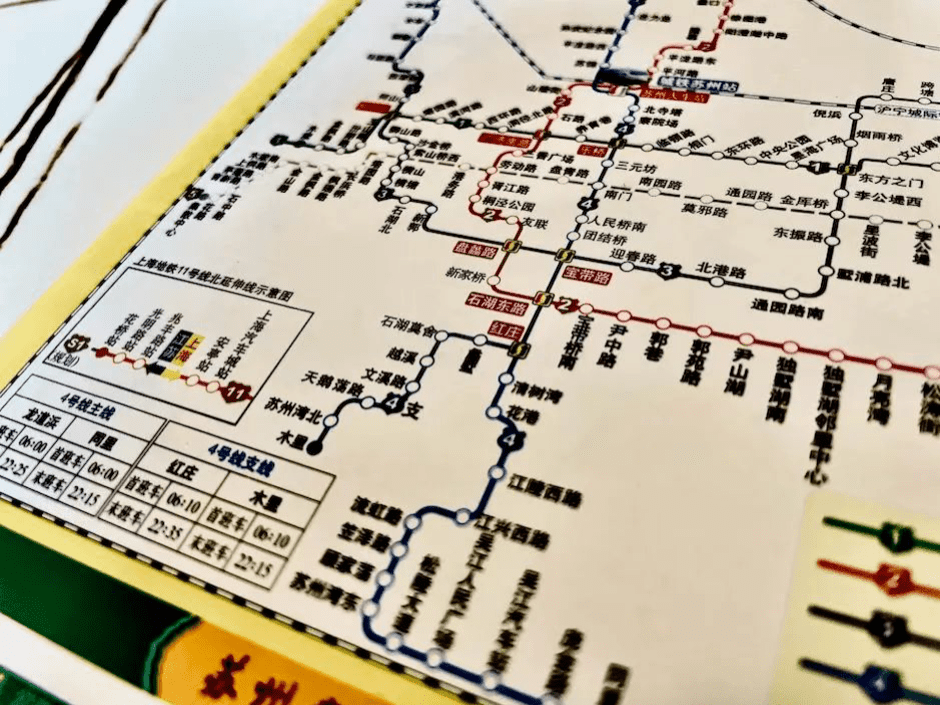 This news was also reported by Xinhua Daily and Yangtze Evening Post. 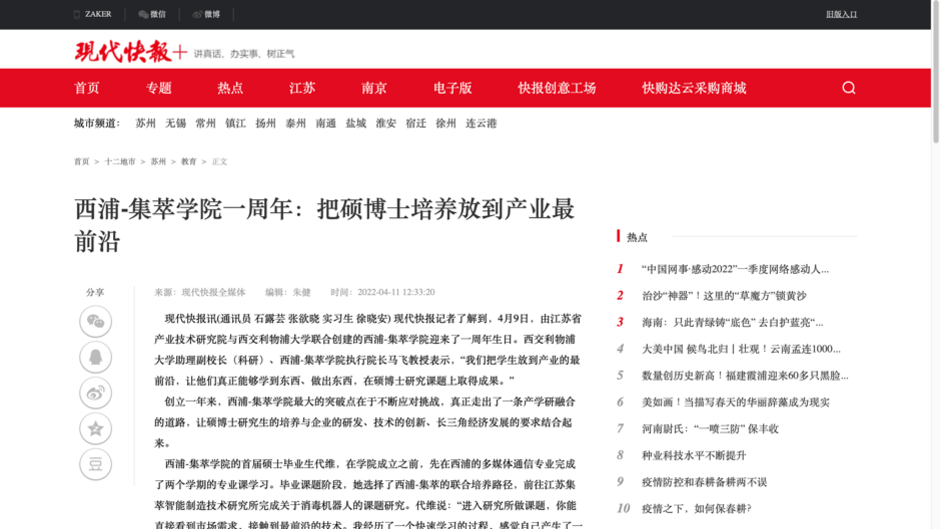 Professor Fei Ma, Executive Dean of the Academy and XJTLU’s Associate Vice President for Research and Impact, says the Academy has achieved goals in combining postgraduate education, enterprise requirements, technological innovation, and economic development. “We put students at the forefront of industry to learn from it and get results for their masters or doctoral research projects.”

This news was also reported by Yangtze Evening Post and Jiangnan Times. 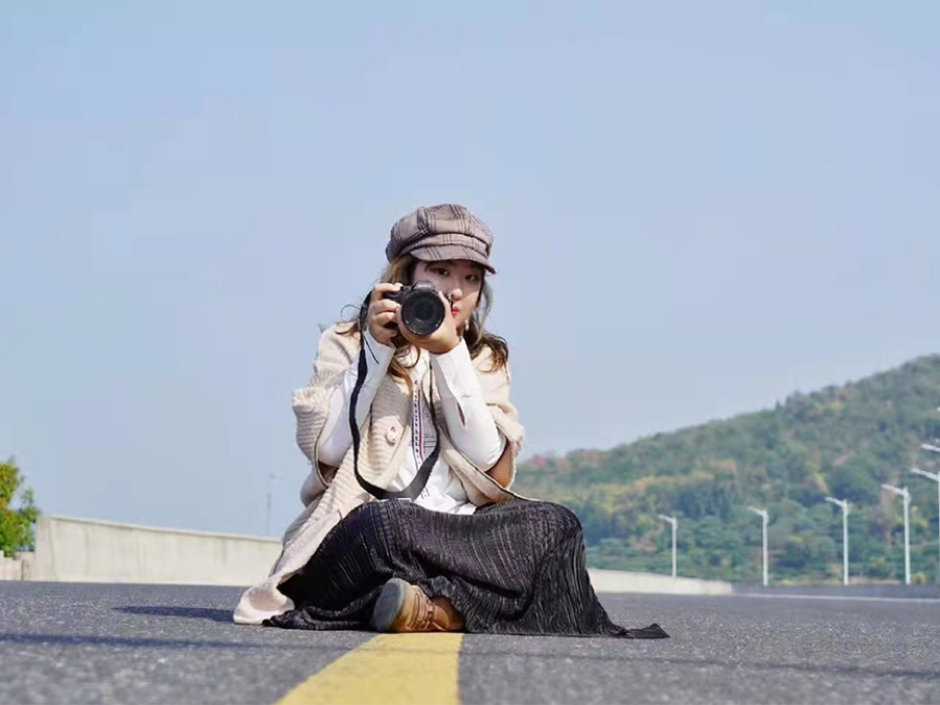 Summary: The Guppy’s Death, a short film directed by Yi Han, a graduate of XJTLU’s School of Film and TV Arts has been shortlisted for more than 10 film festivals, including Berlin International Art Film Festival, and won the Best Short Film Award at the Halicarnassus Film Festival.

This news was also reported by Xinhua Daily.

YZNEWS
Headline: This post-90s guy is happy to be a “hometown recommendation officer”!
Published on: 20 March 2022 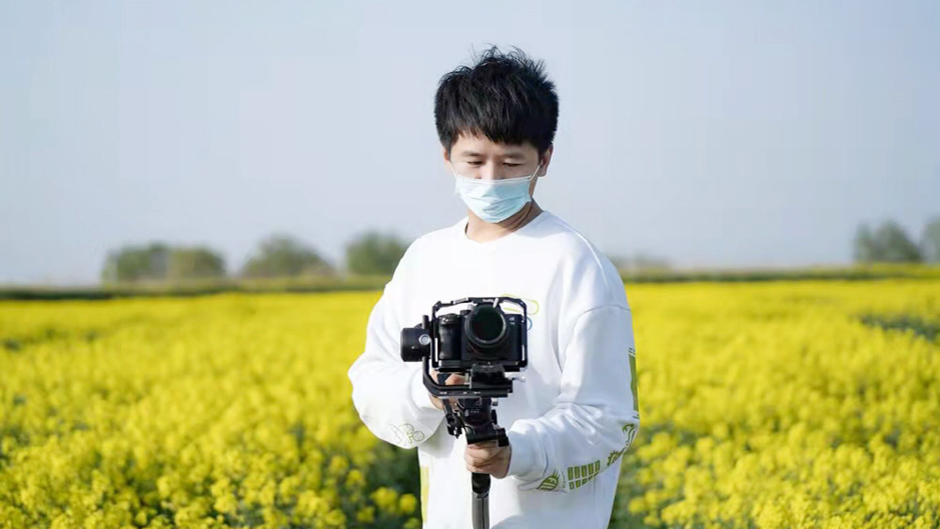 Summary: Danchen Yan, an XJTLU graduate, took a series of videos on the beautiful scenery in Yangzhou. His videos have exceeded one million views on TikTok in total. “I grew up in Yangzhou, and I want to use my camera to show people my favourite city,” he says. 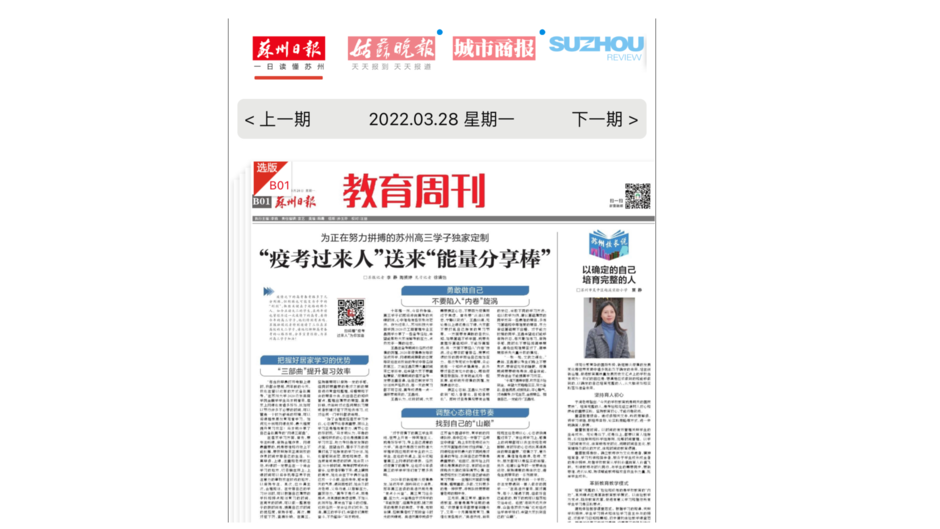 CHINA RADIO INTERNATIONAL
Headline: Dr Qijian Xie from XJTLU: Keep a clear mind, and hold on to your beliefs
Published on: 31 March 2022 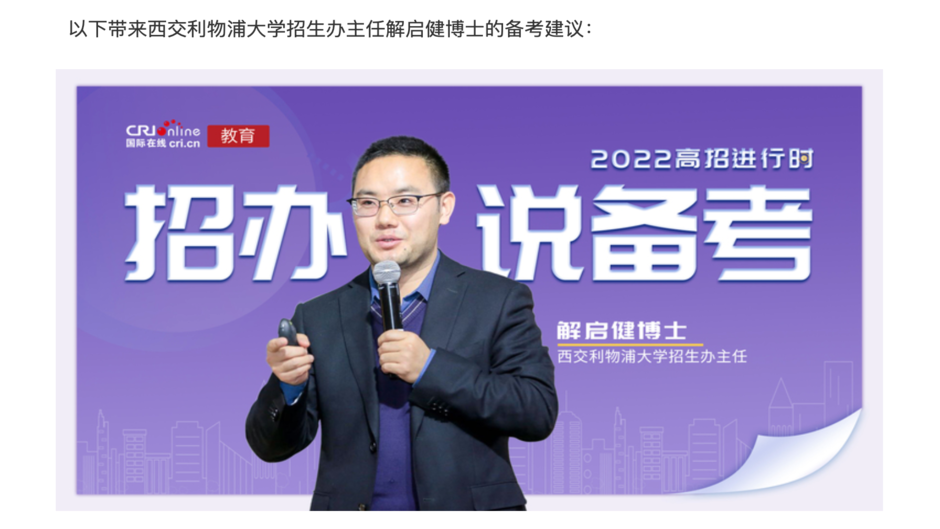 Summary: China Radio International (CRI) recently launched a series of talks on college admission and exam preparation. Dr Qijian Xie, Director of the Centre for Student Affairs at XJTLU, was invited to explain the latest admission policies, and help students prepare for the college entrance examination. 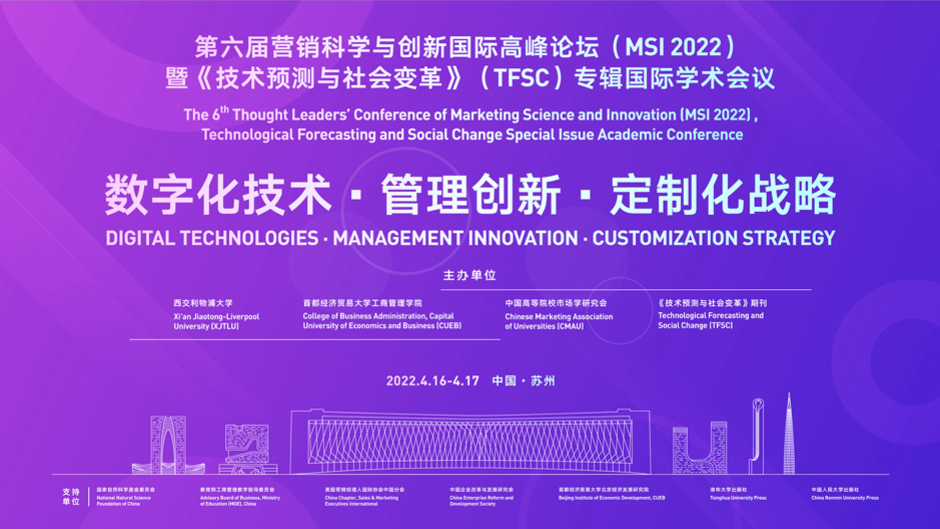 Summary: Recently, XJTLU held the sixth Thought Leaders’ Conference of Marketing Science and Innovation (MSI 2022). More than 300 experts and scholars in business administration from around the world attended the event virtually and discussed digital technology, management innovation and customised strategies in depth.

This news was also reported by Yangtze Evening Post and Sina Corporation. 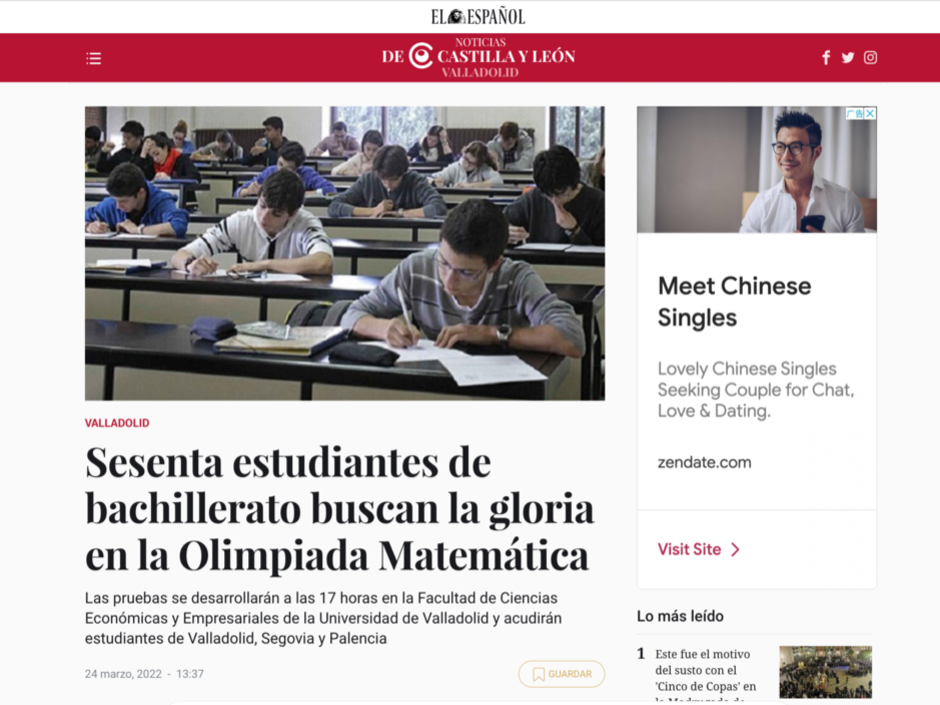 Summary: Recently, more than 60 high school students attended the local phase of the XIII Spanish Olympiad of Economics at the University of Valladolid. The top five finishers will participate in the international phase organised by Xi’an Jiaotong-Liverpool University.

SUPCHINA
Headline: Global biodiversity is collapsing. What is China doing to bend the curve of nature loss?
Published on: 24 March 2022 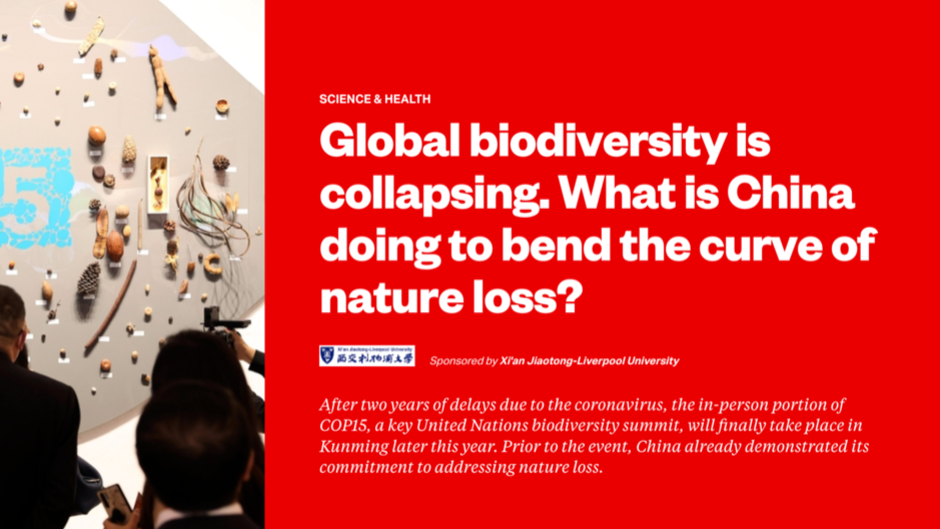 Summary: As one of 17 mega-biodiversity countries in the world, China has been working steadily to protect its biodiversity through a host of policies and measures. If the situation permits, the 15th United Nations biodiversity conference (COP15) will take place later this year in Kunming.

Commenting on COP15, Dr Lingyun Xiao from the Department of Health and Environmental Sciences says that the core theme in the framework is a target of “30 by 30”, which means conserving 30% of Earth’s land and waters by 2030. 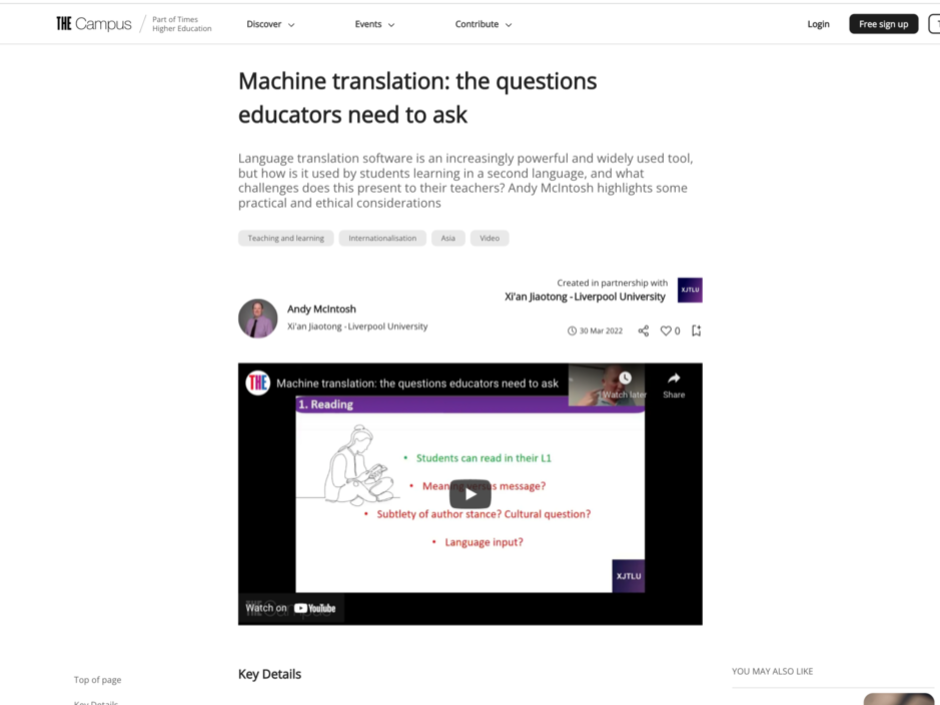 Summary: Language translation software is a widely used tool. Andy McIntosh at XJTLU’s English Language Centre highlights some practical and ethical considerations regarding how it is used by students learning in a second language, and the challenges it presents to the teachers. 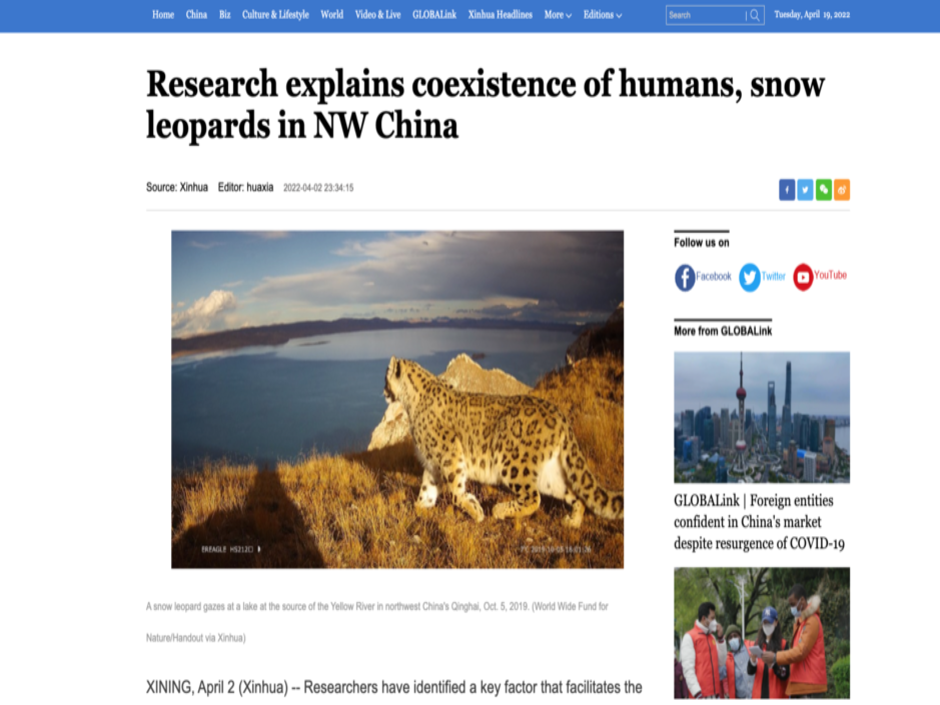 Summary: In her new study, Dr Lingyun Xiao at the Department of Health and Environmental Sciences explores the possible impact of livestock grazing (particularly yak and sheep) on the snow leopard and its prey, and how humans can coexist with wild animals.

Dr Xiao says: “We usually think that to protect large carnivorous wild animals, we need to provide them with a very large area. But through this study, it is found that even for large mammals like the snow leopard, what they need is just those rocky mosaics scattered across herders’ pastures.” Summary: Led by XJTLU and composed of partners from China and the US, Y-Team created a fully solar-powered house in Zhangjiakou, one of the main 2022 Winter Olympics events sites.

Dr Marco Cimillo, Associate Dean for Learning and Teaching at XJTLU’s Design School, served as the faculty lead of the interdisciplinary team. He says the sustainable design has resulted in distinctive architectural outcomes and user experiences.

“The house has a multi-layered architectural envelope that includes the main structure in laminated bamboo, which is a natural low-impact material,” says Dr Cimillo. “And the house can be built in different climates by adapting the current configuration.” 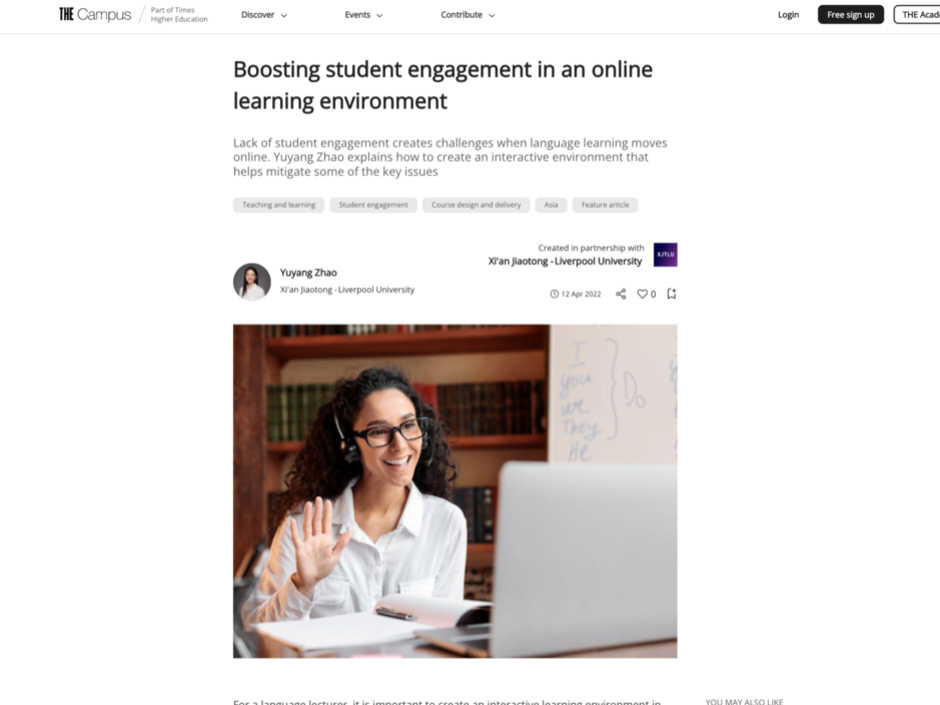 She says: “Let students know what is expected of them in advance. Create an environment in which student agency is well supported, and provide clear and concise instruction. Educators need to embrace shifting circumstances, especially during difficult and challenging times.”

EUREKALERT!
Headline: The shape of things to come: tropical birds are changing because of us
Published on: 14 April 2022 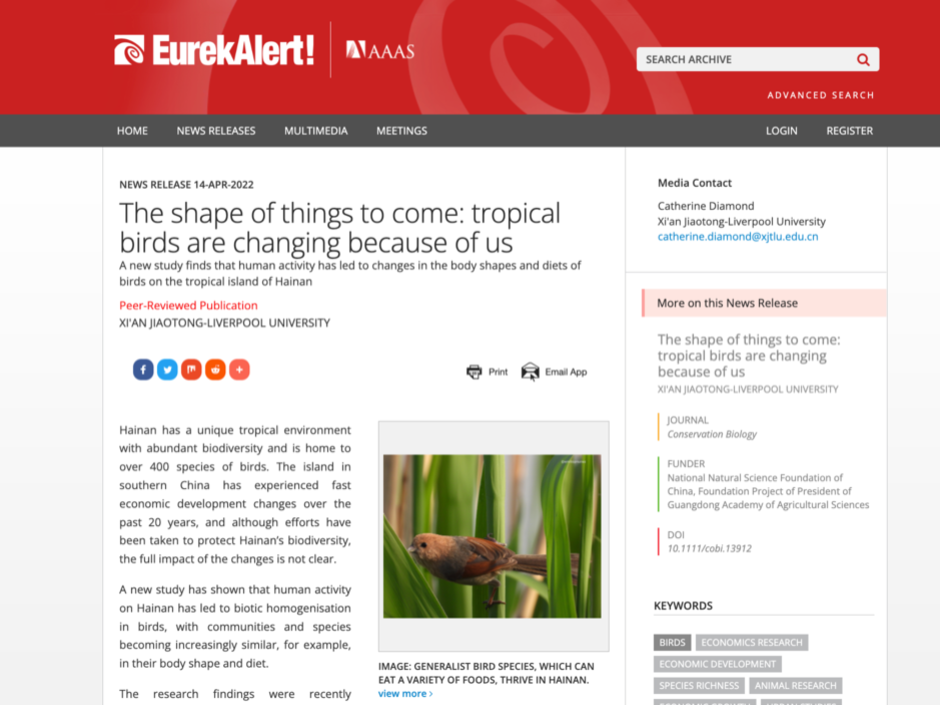 Summary: A new study has shown that human activity on Hainan island has led to biotic homogenisation in birds, with communities and species becoming increasingly similar.

Dr Emilio Pagani-Núñez, Assistant Professor at XJTLU’s Department of Health and Environmental Sciences, says: “There is hope for biodiversity, that economic growth and enhanced biodiversity conservation are possible. However, a price will be paid, and it is our duty to prevent such negative effects by developing targeted policies on especially diverse or sensitive ecosystems and communities.” 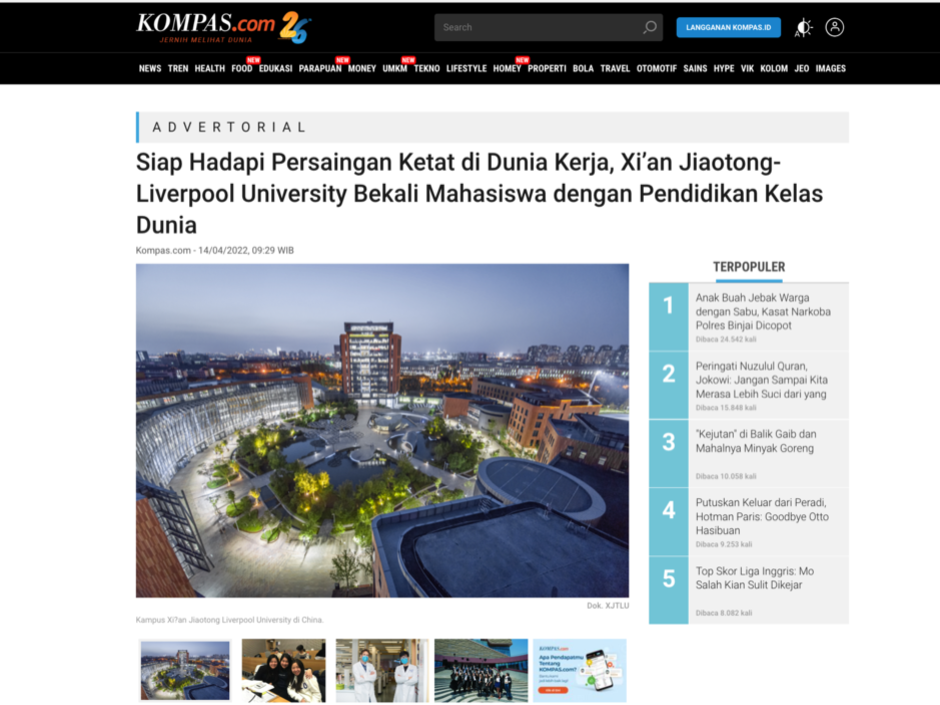 Summary: Recently, Kompas featured XJTLU as a leading international university in China. Alumni from Indonesia spoke about how studying at XJTLU gave them a competitive edge when job hunting, especially with companies who have dealings with China. 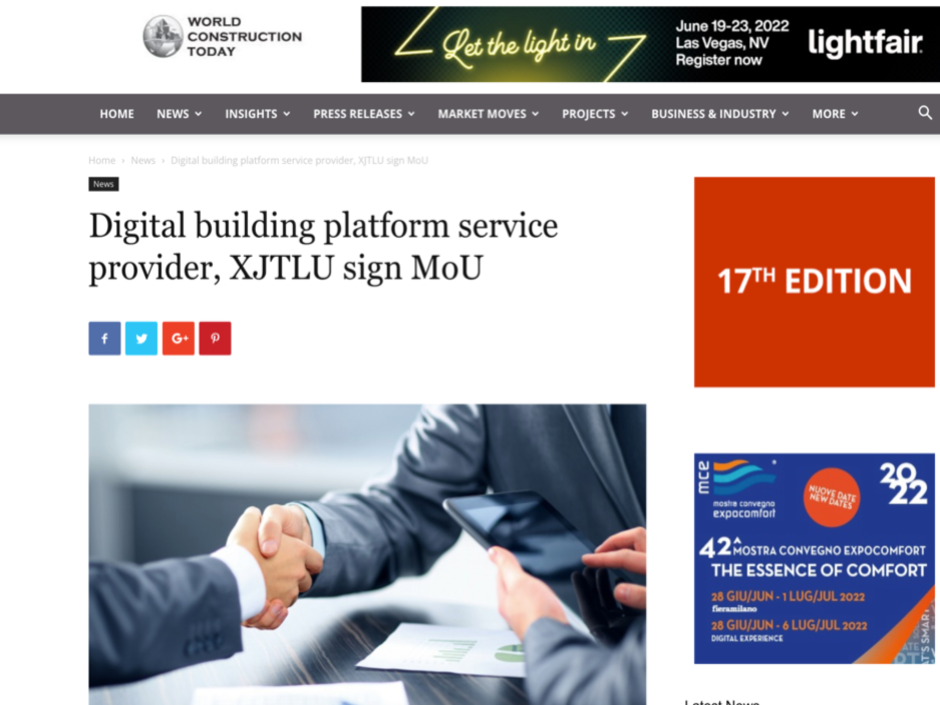 Summary: Recently, XJTLU signed a memorandum of understanding (MoU) with Glodon, a digital building platform service provider, in an online signing ceremony. The MoU was signed with the aim of enhancing collaboration to increase digital awareness in architecture, engineering, and the construction sector, and to contribute to a better-built environment. 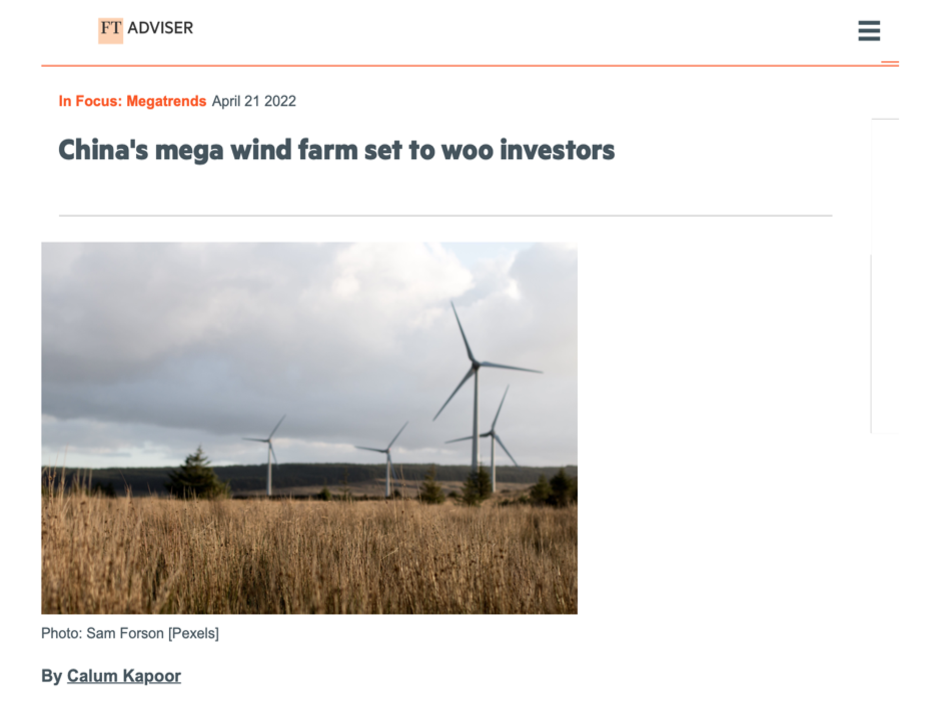 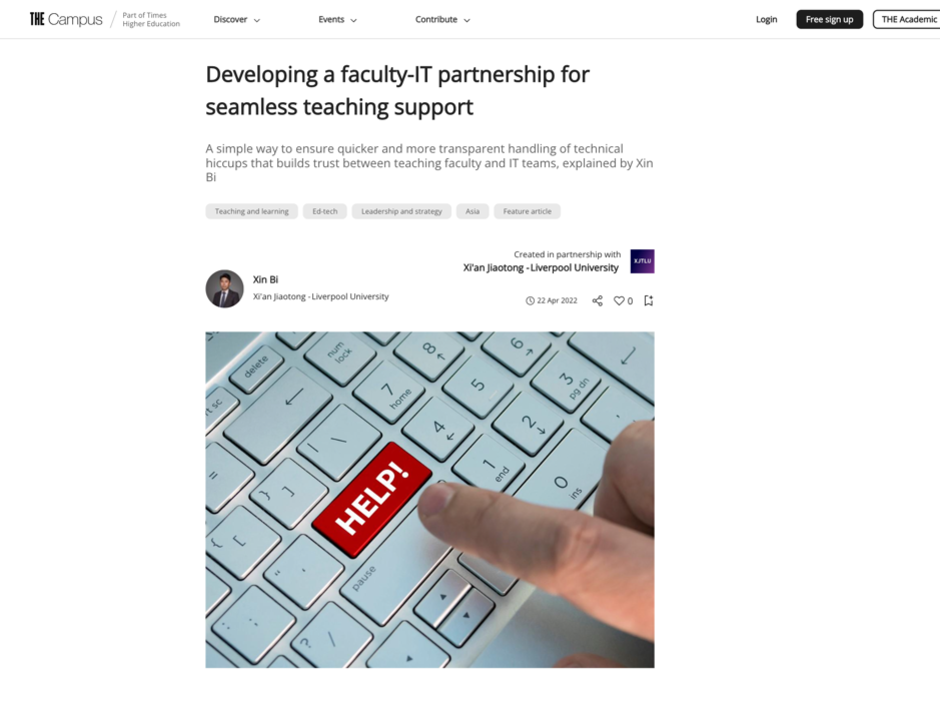 Summary: Dr Xin Bi, director of the Centre for Knowledge and Information and the XJTLU Learning Mall, explains a simple way to ensure quicker and more transparent handling of technical hiccups – an instant messenger IT support chat channel that includes all IT managers and engineers and is open to all academic staff. 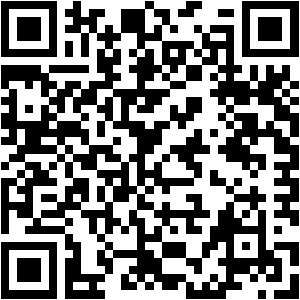 28 February 2022
XJTLU in the Media in January and February