XJTLU in the Media in August and September

Homepage>News>XJTLU in the Media in August and September

During the past two months, XJTLU was mentioned in media reports from outlets including China Central Television, Qunzhong Magazine, Xinhua Daily, Yangtse Evening Post, JSTV, Suzhou Daily and JSChina. Researchers from XJTLU have also been included in stories and sought for comment in English-language media outlets including CGTN, Science and New York Times.

University Marketing and Communications would like to express gratitude to all the students and colleagues who contributed to interviews. If you have a news request or story brief, please email us at UMC@xjtlu.edu.cn. 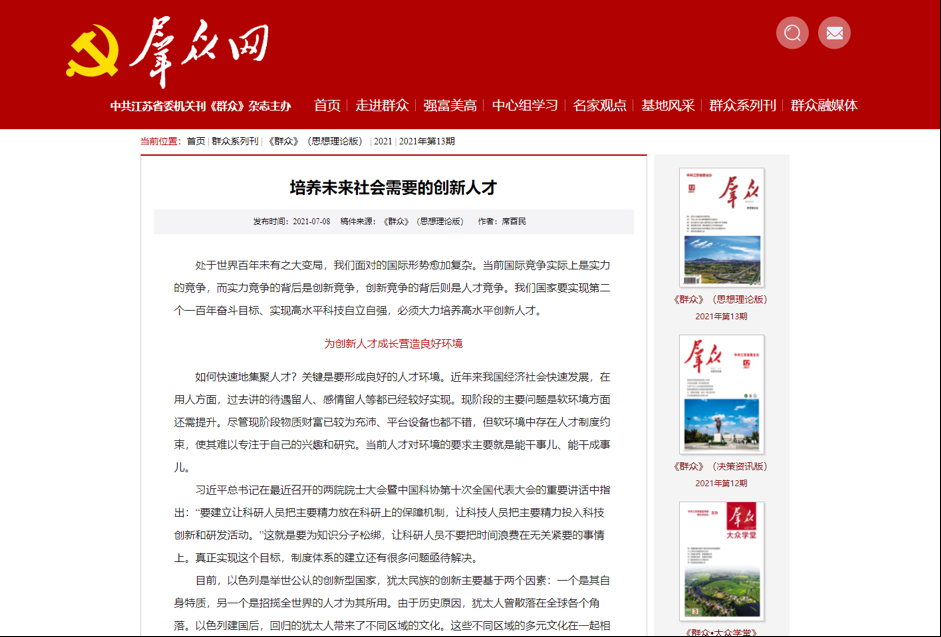 Special thanks to Professor Youmin Xi.

Headline: From teachers to educators - XJTLU faculty training and development
Published on: 9 September 2021 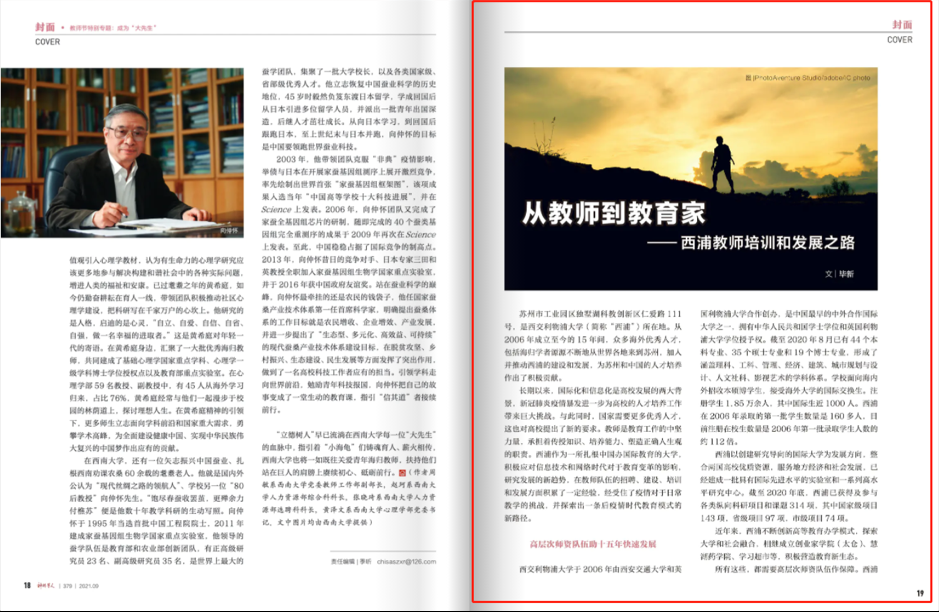 Summary: China Scholars Abroad recently published an article by Dr Xin Bi, Director of the Centre for Knowledge and Information at XJTLU. In his article, Dr Bi emphasises the role of teachers and their duties to impart knowledge, develop students’ abilities, and demonstrate correct values.

As an international joint venture university in China, XJTLU embraces information technology innovation and educational reformation. The University has gained experience in recruiting, training and developing teachers; risen to the challenges of COVID-19; and found a new approach to post-pandemic education. 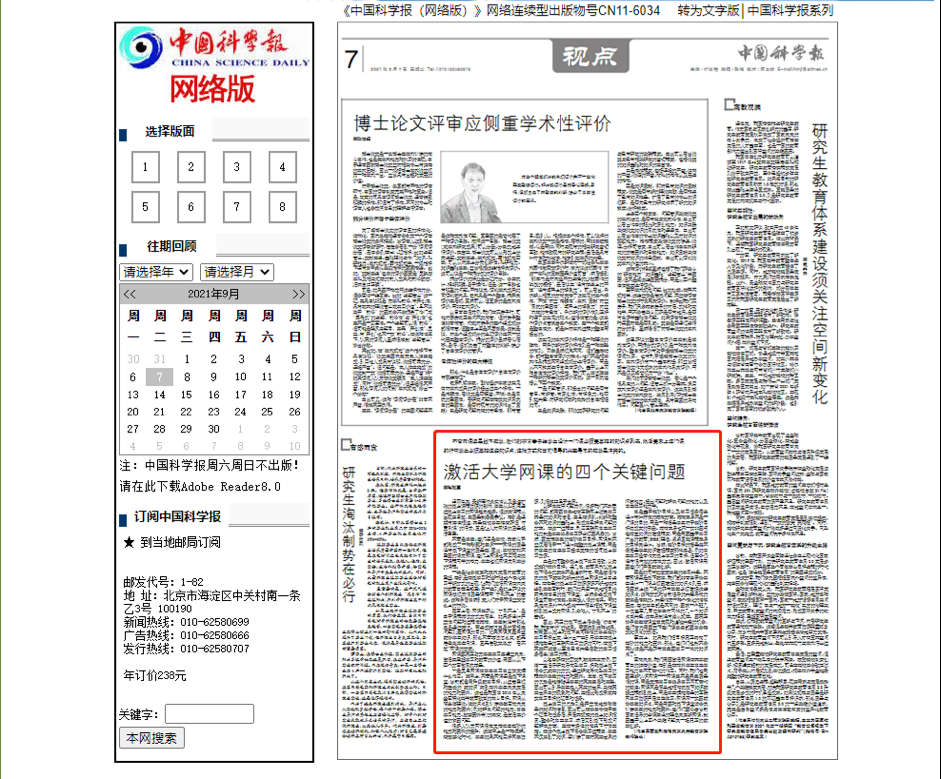 Summary: In September, China Science Daily published an article by Dr Xiaojun Zhang, Executive Dean of the Academy of Future Education at XJTLU. In his article, Dr Zhang pinpointed four top considerations for teachers: the role of online learning during the pandemic, how to integrate online and offline learning, effective assessment design, and ways to inspire students to learn.

Summary: Hengqin is located in the Guangdong-Hong Kong-Macao Greater Bay Area, and doesn’t have border restrictions. It is a convenient place for consumers and importers to buy and sell.

Dr Samuel Kwok, Associate Professor of the Department of Accounting at XJTLU’s International Business School Suzhou, believes an international trade show in Hengqin could attract importers of quality consumables, including many luxury brands. 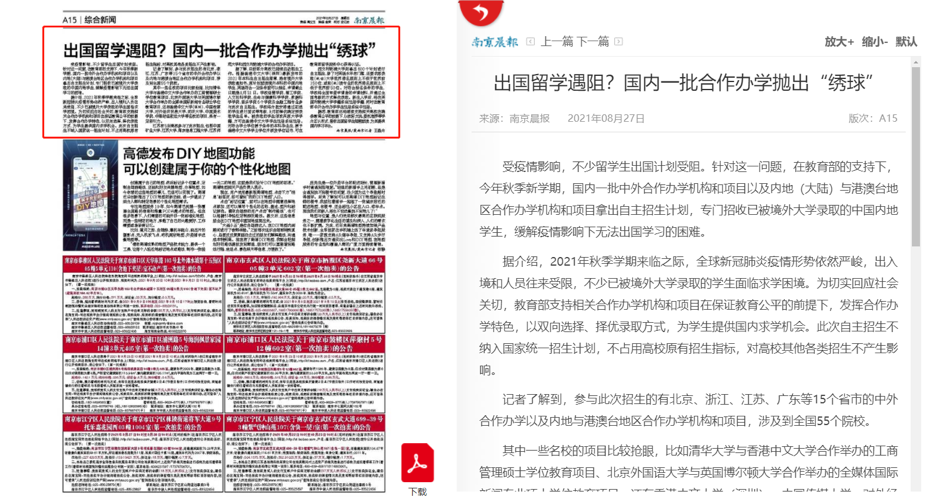 Summary: Many study abroad programmes were halted in the wake of the coronavirus pandemic. The Chinese Ministry of Education now permits a number of Sino-foreign joint venture universities to accept applications of domestic students who have received offers from universities overseas

According to Nanjing Morning Post, XJTLU can admit a quota of 600 of these students. The University will review all applications carefully. Successful applicants will register with the University of Liverpool and XJTLU.

This news was also reported by jschina.com.cn. 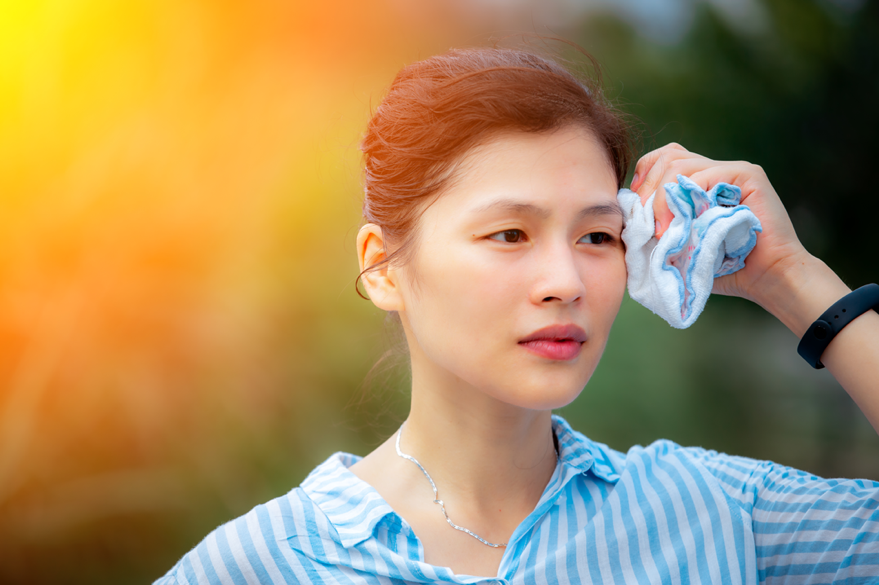 The news was also reported by Yangtse Evening Post, JSTV and Suzhou Daily.

Headline: Farm consolidation has a negative effect on wild pollinators
Published on: 5 August 2021 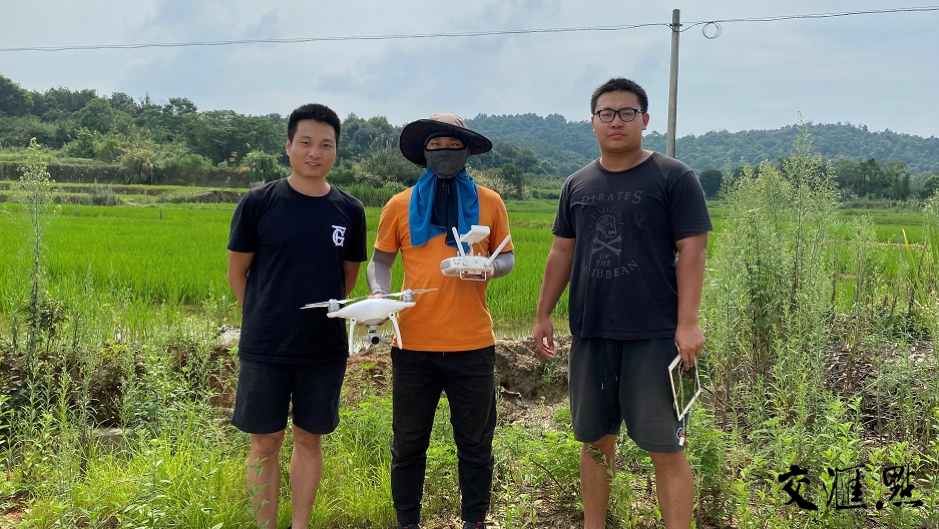 Summary: A recent study conducted by researchers from XJTLU and other universities indicates that the consolidation of traditional farms in China has a negative effect on wild pollinators’ biodiversity.

This news was also reported by JSTV, Yangtse Evening Post and Suzhou Daily. 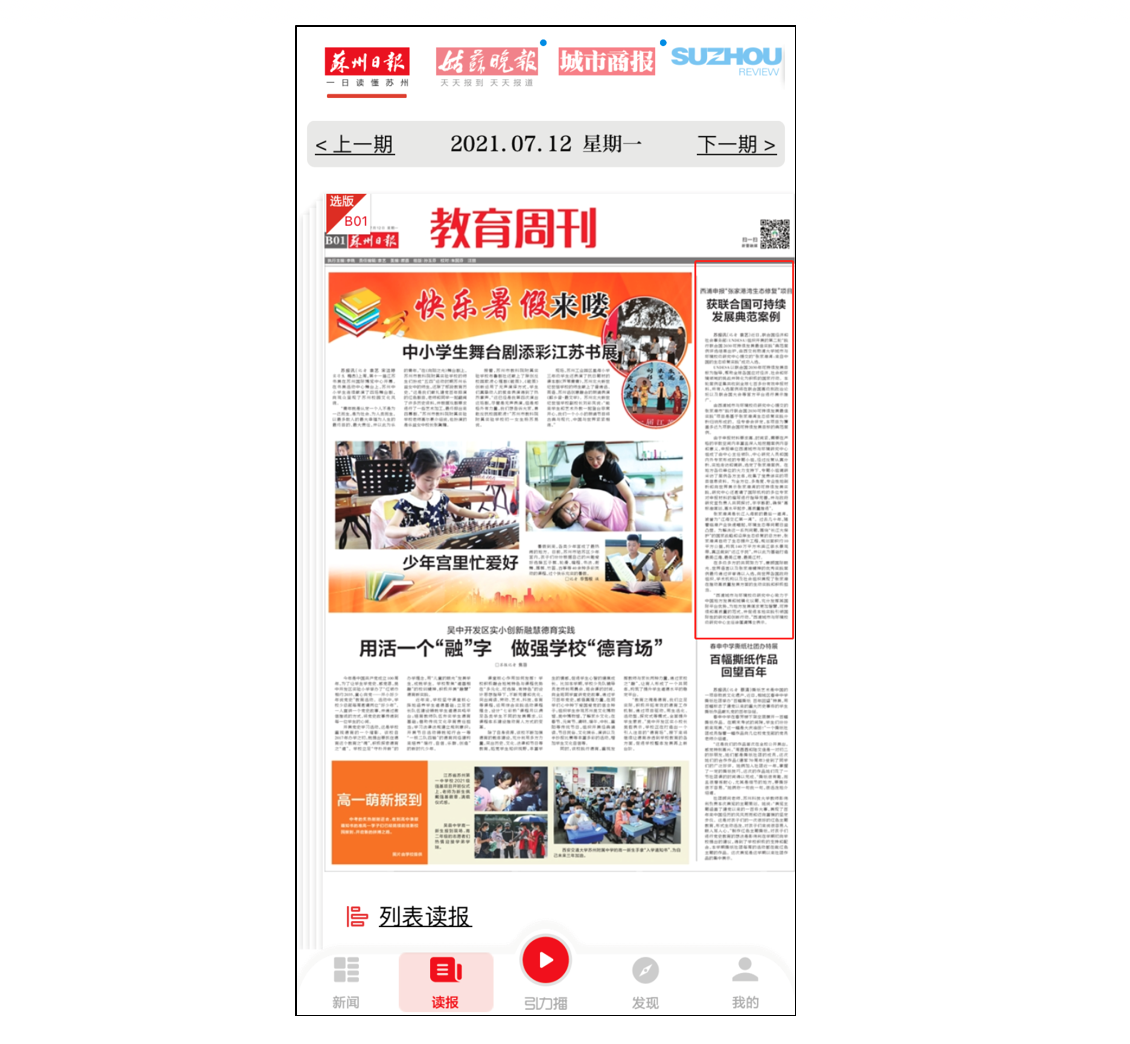 Summary: “Zhangjiagang Bay: Practice of Ecological Restoration in China”, a restoration project proposed by the Urban and Environmental Studies University Research Centre at XJTLU, was selected as a Sustainable Development Goals Good Practice in the second open call by the United Nations Department of Economic and Social Affairs.

This news was also reported by Yangtse Evening Post. 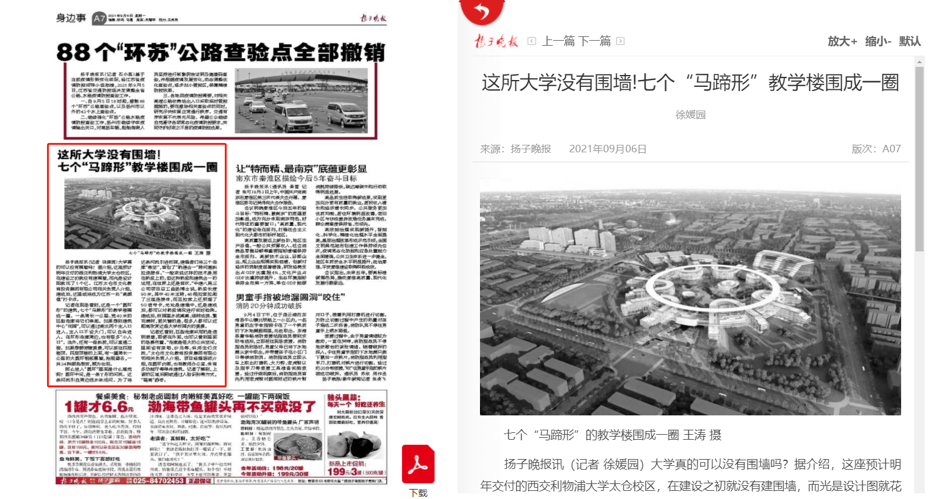 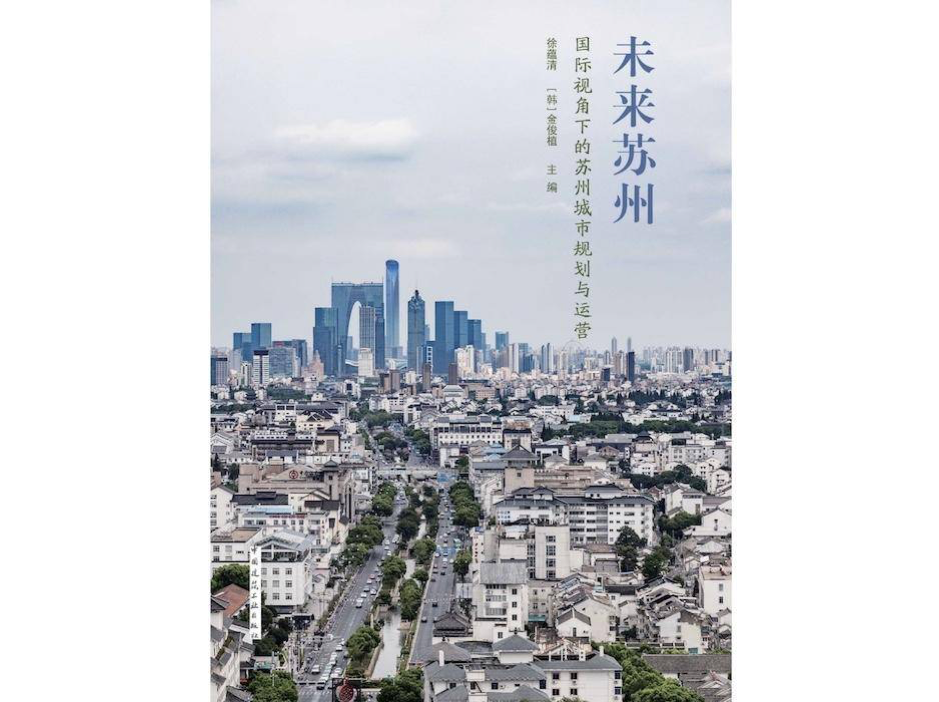 Summary: Recently, a group of XJTLU scholars published a new book called Future Suzhou. The book was edited by Dr Yunqing Xu, Director of the University Research Centre for Urban and Environmental Studies, and Professor Joon Sik Kim, Head of the Department of Urban Planning and Design. The book explores how Suzhou can become a leading modern future city.

This news was also reported by Suzhou Daily and subaonet.com.

Summary: A group of XJTLU students won the Echo of Rubble competition for their work ‘Mourning Clock’, an hourglass designed to mourn the collapse of the Aleppo Mosque in Syria and to reawaken mankind’s resistance to war.

This news was also reported by Modern Express. 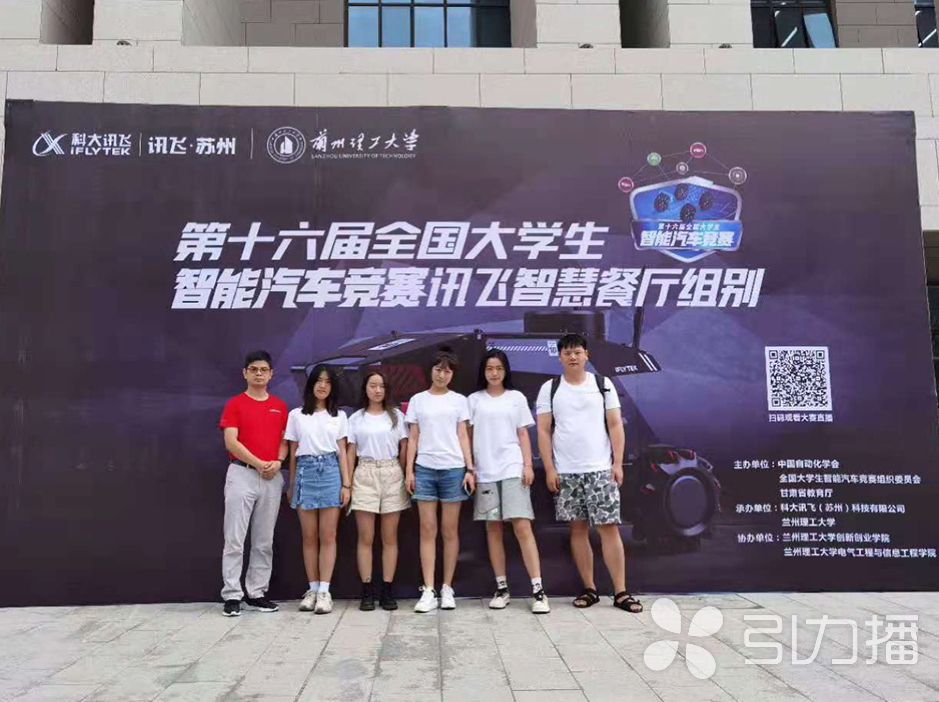 Summary: A group of students at XJTLU Entrepreneur College (Taicang) won second prize in the 2021 iFLYTEK Intelligent Vehicle Competition for college students. Their task was to make an intelligent vehicle that can be used in restaurant services. All five team members, now Year Three students, were among the first batch enrolled in the BEng Data Science and Big Data Technology programme at XJTLU Entrepreneur College (Taicang).

This news was also reported by Gusu Evening Post. 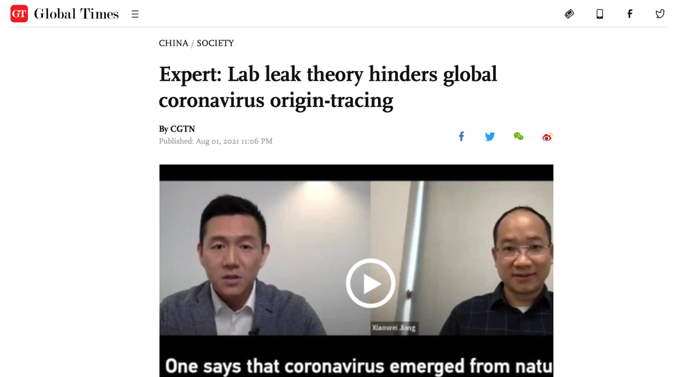 Summary: Dr Xiaowei Jiang, a biologist from XJTLU, says in an interview with CGTN anchor Guan Wang: “All current evidence supports that a novel virus, such as SARS-CoV-2, which was unknown to humans before, could not have escaped from the lab.” The so-called lab leak theory lacks evidence and hinders global efforts to trace the origin of the virus, he says.

The news was also reported by China Daily.

Special thanks to Dr Xiaowei Jiang.

Headline: What electric vehicle manufacturers can learn from China – their biggest market
Published on: 3 August 2021 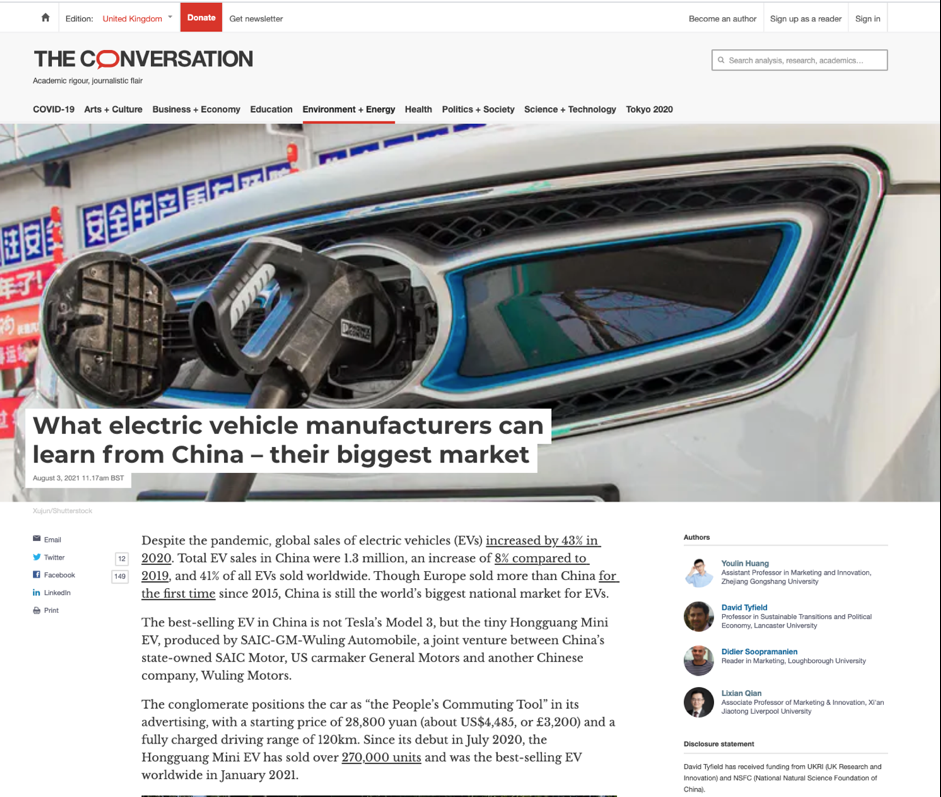 Summary: Dr Lixian Qian from XJTLU’s International Business School Suzhou, along with researchers from three other universities, found that Chinese consumers in small cities – each with fewer than a million residents – were the most keen to drive electric vehicles. Their research reveals significant market opportunities for electric vehicles and casts light on innovative business models on the Chinese mainland.

The news was also reported by Channel News Asia and in L’indro.

Headline: Farm consolidation has a negative effect on wild pollinators
Published on: 16 August 2021 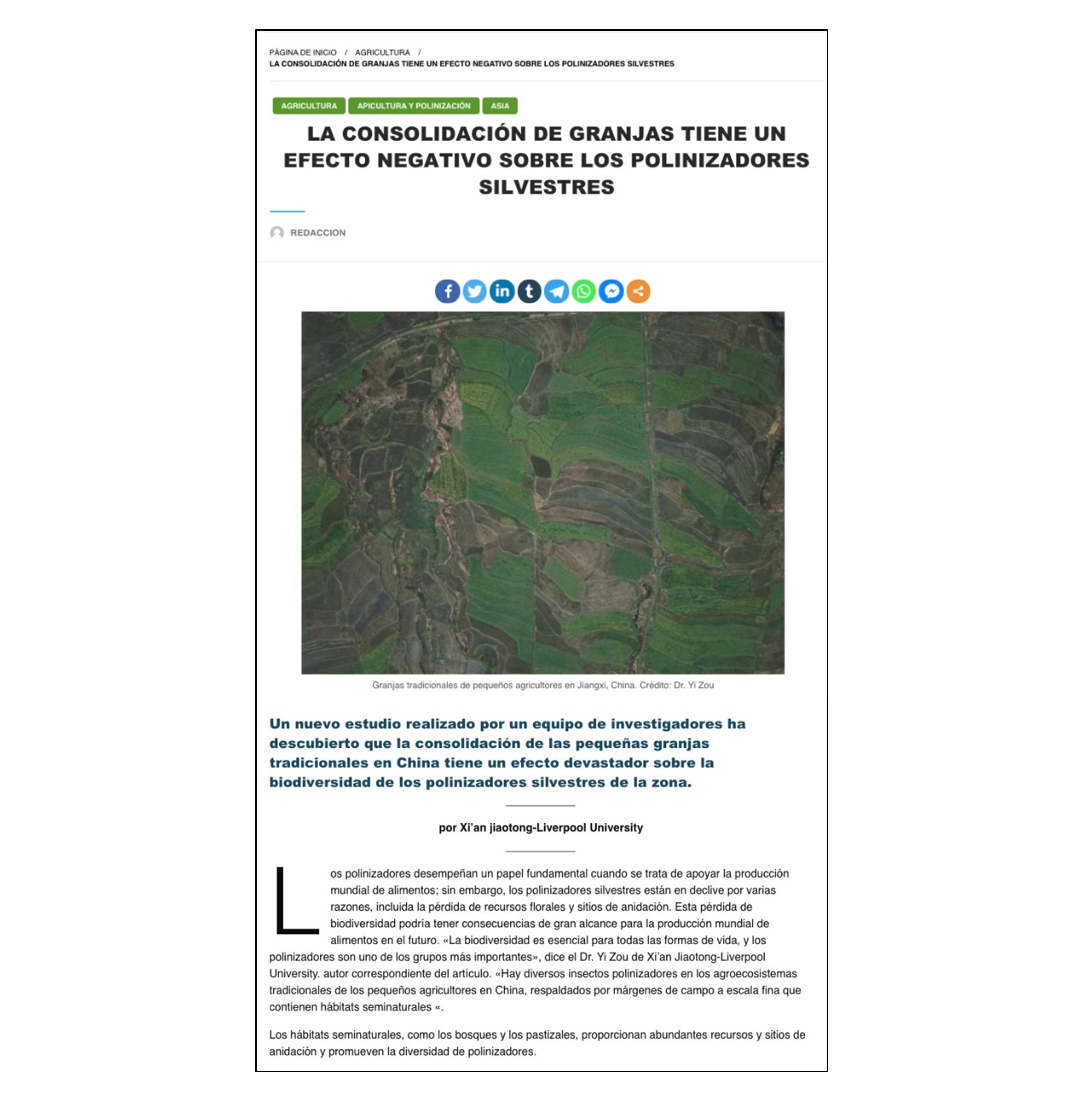 Summary: Wild pollinators play a key role in supporting food production, but their numbers are declining for various reasons. The loss of biodiversity can have profound effects on global food production. "Biodiversity is essential to all forms of life, and pollinators are one of the most important groups," says Dr Yi Zou of Xi'an Jiaotong-Liverpool University’s School of Science.

Summary: Extreme heat is a leading cause of weather-related human mortality, but not many studies consider how contributing factors may vary at city, city-region and neighbourhood levels. This is according to a research article published in the Elsevier journal Sustainable Cities and Society by Dr Jinglu Song of Xi’an Jiaotong-Liverpool University, Dr Hanchen Yu of Harvard University and Dr Yi Lu of City University of Hong Kong. The study analyses the impact of factors contributing to heat-related death at different spatial scales.

The news was also reported by Ohbuletin in Malay, and Thegioimoitruong in Vietnamese.

Headline: Fuel economy standards could save Malaysia 16.2 billion liters of petrol by 2030 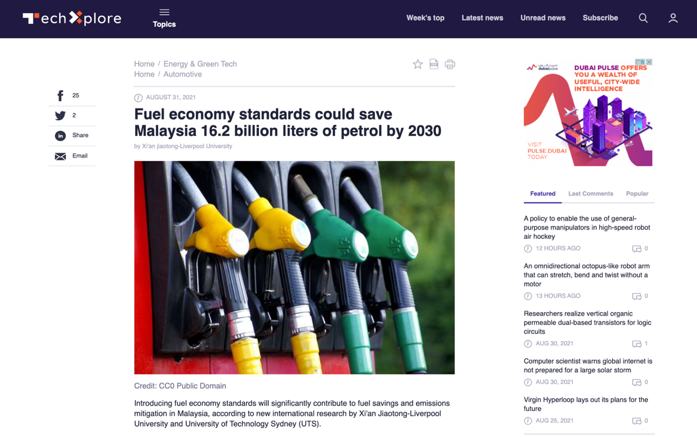 Summary: In a paper published in the journal Sustainability, Professor Eng Hwa Yap from XJTLU, along with Professor Teuku Meurah Indra Mahlia and PhD student Ahmad Zuhairi Muzakir from University of Technology Sydney, found that if Malaysia adopted a fuel economy standards policy, it would provide huge savings in fuel consumption and reduce carbon emissions.

The news was also reported by Eurasia Review. 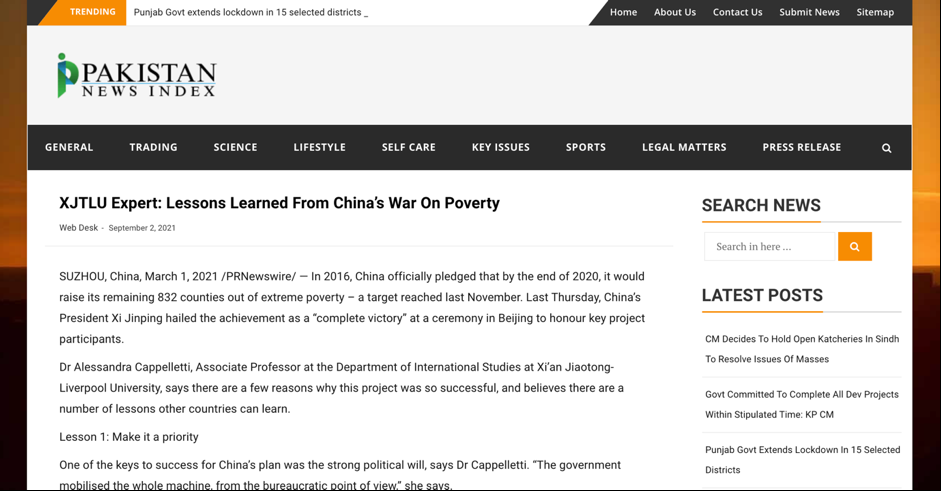 Summary: In 2016, China pledged that by the end of 2020, it will eliminate poverty over entire regions and eradicated extreme poverty. Dr Alessandra Cappelletti at Xi’an Jiaotong-Liverpool University, explains the reasons why this project was so successful and the lessons other countries can learn.

Headline: Move over, Shanghai and Beijing? Suzhou wants to be the ‘Pharmacy Valley of China’
Published on: 7 September 2021

Summary: In April 2020, Suzhou unveiled a plan to create a biopharmaceutical ecosystem and to build a “Pharmacy Valley of China”. Some of the most essential components of the ecosystem are “practice-oriented, interdisciplinary, and high-end global talents,” “research in cutting-edge areas of bioscience,” and “opportunities for cross-discipline cooperation,” explains Dr Yimin Ding, Vice President of Xi’an Jiaotong-Liverpool University. “And that’s where XJTLU comes in.”

Special thanks to Dr Yimin Ding. 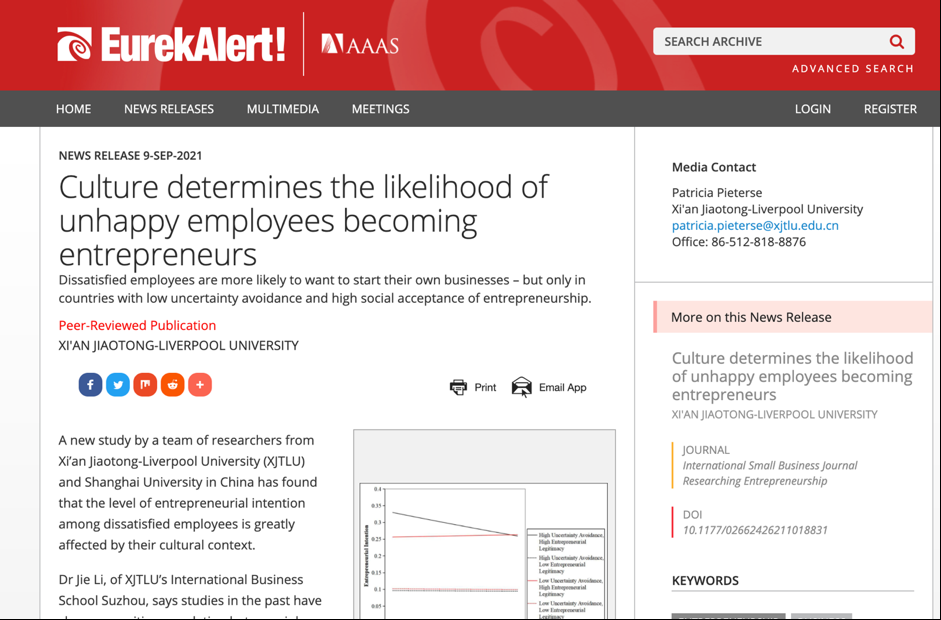 Summary: Dr Jie Li, from XJTLU’s International Business School Suzhou, found that in societies which support entrepreneurial ventures, and countries where people are more likely to take risks, there’s a far stronger link between low job satisfaction and the intention to start a business.

The news was also reported by Asian News International. 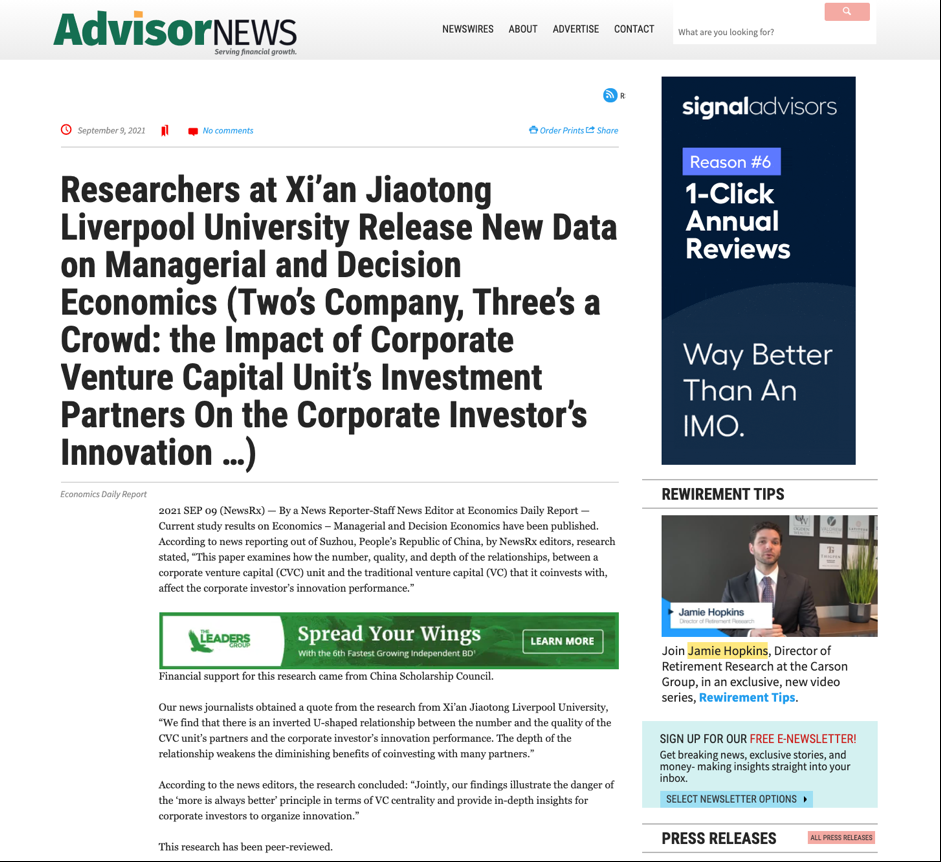 Summary: Dr Xiao Wang from International Business School Suzhou at XJTLU and researchers from two other universities found an inverted U-shaped relationship between the number and the quality of the corporate venture capital unit's partners and the corporate investor's innovation performance.

Headline: Become a Better Professional by Being a Student Again in China
Published on: 11 September 2021 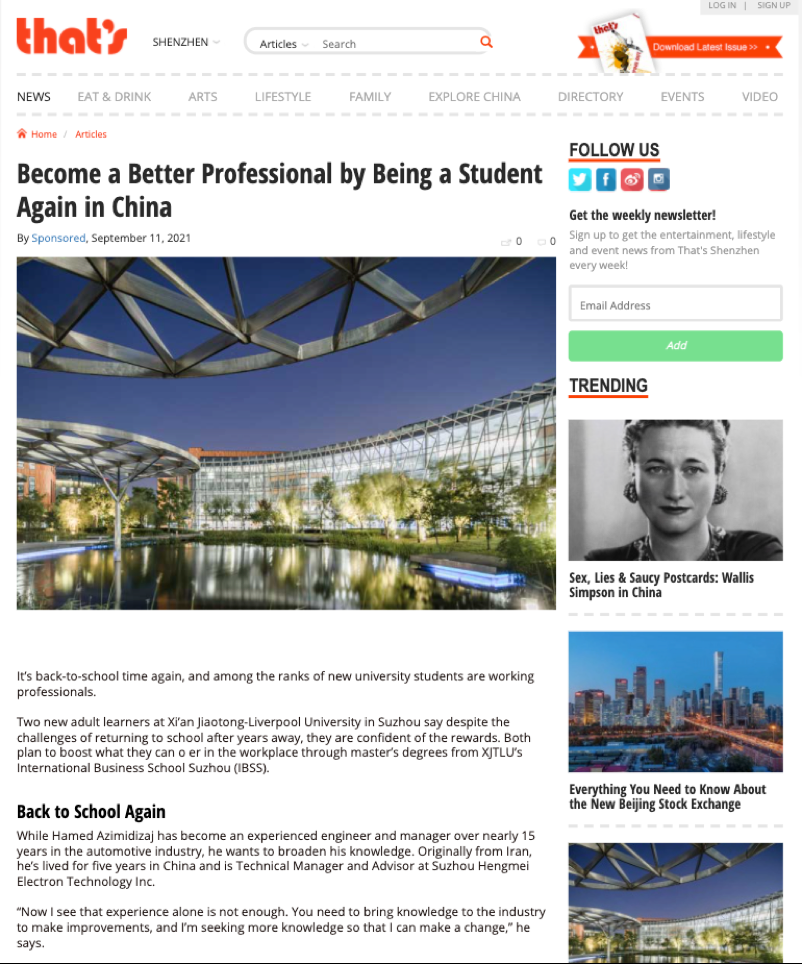 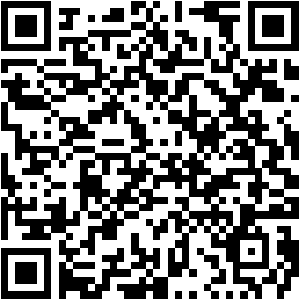